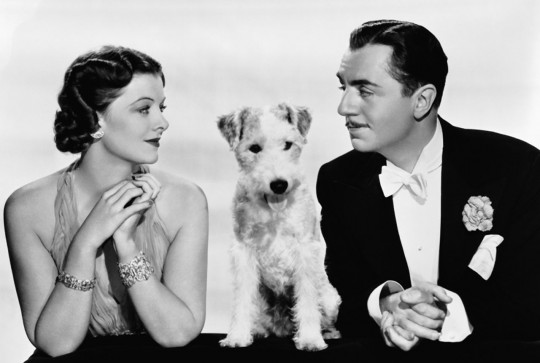 I’ve written before about my love affair with The Thin Man movies. But after viewing “William Powell: A True Gentleman” which came in the box set of “The Complete Thin Man Collection

” I am more than ever convinced that this is a man whose wit, charm and style we should seek to emulate.

After a decade treading the boards in New York and not conventionally handsome, Powell started out playing villains in silent pictures. He was one of the few silent film stars to welcome the advent of the talking pictures, confident that his stage training would see him through. He was right. Women, in particular, found him dashing and liked his brand of scoundrel.

He started playing leads, and attracted attention as the elegant private detective in Philo Vance in “The Canary Murder Case” (1929). But it was in 1934 when he went to MGM to star opposite Myrna Loy in “Manhattan Melodrama” that something clicked. According to the director, they two had an off set banter that kept all around them in the best spirits. They were both cast in “the Thin Man” as a result with Myrna Loy commenting later that it was the most fun she ever had in the movies.

Although married and divorced three times, the worst thing ever said about him by an ex-wife is that he was “rather fastidious.” By the end of his career in 1955, he had received three Academy Award nominations. Not bad for a guy who started out playing the heavy.

At his funeral in 1984, Lauren Bacall described him as being “above all, a true gentleman.”

If you haven’t seen them already, buy “The Thin Man” series outright. Venturing deeper into his work, I highly recommend “Life with Father” and “Mister Roberts” which showcase William Powell’s remarkable range.