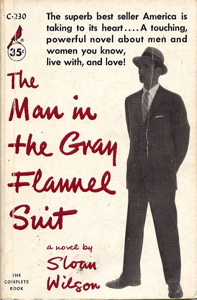 Walking back from my tailor’s today, I started to think about my suit. Not the one I’m having made up, but the one I’m wearing now. It was made for the incomperable Mrs. E’s paternal grandfather by Gieves & Hawkes of Savile Row. It’s made of heavier wool than we’re used to wearing now and so makes up and drapes beautifully. It’s a three piece, side-vented suit (lapels on the vest), three-button rolling to the second. The lapels are narrow — 2 1/2″. It was made in 1966. And it is a sober, businessman’s suit. It is a dark grey. I love grey suits. And I think that most men who wear suits do too.

I only wish it were flannel.

Although it was associated with the “corporate man” of the day (and became a sort of scarlet letter for the suit-haters), Sloan Wilson’s novel left us with an iconic figure: The Man in the Gray Flannel Suit. And I’m pleased to say, he’s back.

Maybe it’s the success of AMC’s “Mad Men,” or just a return to realizing that the stuff looks good on us, whatever the reason, there are a lot of designers bringing back the grey flannel suit. (Of course, you can still get them at B-Squared and J. Press.)

Today’s gray flannel suited man isn’t wearing the boxy sack suit by Brooks Brothers (even their cut has undergone some modifications.) Nor is he as well-kitted out as Fred Astaire, who loved grey flannel so much that Audrey Hepburn displayed his picture in a frame covered in grey flannel. And that may be because flannel seemed to go out of fashion, to be considered too corporate, or too warm or something. We lost the habit of wearing and accessorizing comfortable suits. (Sneakers don’t count. At all. Ever.)

Flannel is kind of a casual, comfortable fabric. It is soft, rather than hard finished, retaining some “nap.” Today’s grey flannel suit is apt to follow the trend toward a slimmer fit suit with a peaked lapel. It can be found in traditional three-rolls-to-two button notch lapel models or made up into double-breasted numbers that look great under a camel-hair polo coat. In medium grey, you really can’t go wrong.

Being a “casual” fabric, you can even pair the equally iconic Brooks Brothers button-down shirt and a striped tie with the single breasted models. (You could do this with a DB, but really only if you realize you’re breaking “the rules.”) Set off by a pair of brown suede shoes, flannel really comes into its own. They, too, were considered “casual” back in the day.

So find yourself a good medium-grey flannel suit (striped or not, single or double-breasted) and celebrate the salary man of the 1950s. While we’re at it, let’s talk about the three-martini lunch…