It’s funny, but I don’t remember hearing anyone use the word “gauche” in a very long time. I used to hear it a lot, along with “unseemly.” Both seem to have gone the way of the dodo. Language, as we know, is fluid, a living thing used to describe our current state of affairs. Perhaps we are more sophisticated these days?

And then I think about our Presidential contenders. Who have definitely stooped to conquer. Things get ugly for the run up to November. God, and politicians, speak to us in terms that we understand, I suppose.

Which makes me want to reach for that word “gauche” again. Because the language they toss around is awful.

Even turning on the radio is getting dicey, especially with young children in the back seat soaking up every double entendre and flat out vulgar reference being made in most of our popular music. (As a former punk rocker, I’m one to talk. But most of that music was a cry against unfair systems. Protest music, most of which could be played on radio, think of The Jam and The Clash, even the Sex Pistols had a toe-tappable ditty or two that were within broadcast standards. They are quaint compared to today’s lyrics.) Standards, it seems, have dropped like one big H-, or should I say F-Bomb.

While we may be dressing better (are we?), our aspirations seem to sink lower, rather than look to rise up (to “better ourselves” for lack of a better phrase.) 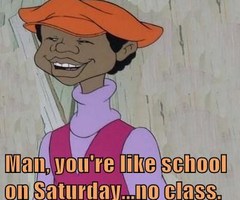 6 thoughts on “An Awkward Moment”