Posted on January 30, 2012 by TheElegantologist 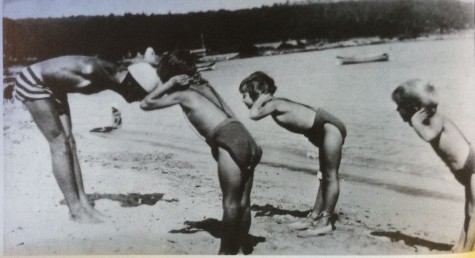 (from “Making It New” and used without permission… let me know.)

You’ll have to forgive my absence of late. We’ve been dealing with sick children (and the two of us), but I’m down to just my daughter today. Of course, I’m also relegated to working on the iPad as she has control of my laptop…

That’s neither here nor there, but it has gotten me thinking, especially after having finished Crazy for the Storm. As I look around the wreck of the Manse, I feel the violent urge to declutter. Not just clean up, but declutter. And that means psychically. The best way to do that is through exercise or sport. I don’t set a very good example for the children that way, I usually work out when they’re at school. And sporadically at that.

Sport and exercise would have been anathema to the elegant man of yore. He might ride, fence, shoot, hunt and fish, but he wouldn’t have been much of a “hardy”. Neither, for that matter, was a juvenile Chris Cox. I grew up playing shortstop on baseball teams. My grandfather taught me to hunt, fish, swim and get around in a motor boat. I tried my hand at archery, but stopped after an arrow went through the hay bale, garbage can, slat fence and buried itself under the dog in the yard next door (note: compound bows are not suburb-friendly). I quit baseball when it got too competitive, around high-school. I didn’t do much of anything after that, save for four years of varsity fencing during college. Most sports hold little interest for me.

I wonder if we are doing our children a disservice raising them in the city and not forcing them to play out-of-doors? It would be up to me to take them out in winter. The thought of chasing up to the mountains for a day of skiing without Mrs. E. leaves me, errrr… cold. An o-dark-thirty drive to swim team makes me shudder at the thought. But I can’t help thinking that we’d all keep healthier if we were to take up badminton, or bicycling or something. My kids would as soon ride bikes as clean up their rooms.

Of course I want them to learn to fence, ride, swim, sail, ski, fish, shoot, and rock climb.  I’m just not sure it’s going to happen.

How about you? Are your children athletes by choice or inclination? Did you force them into playing something? Did you play a sport or continue to play a sport? Do you play together?