Boil a pot of salted water.

Heat a skillet (cast iron if you have it. Don’t use non-stick) to smoking. When the water is boiling, the skillet should be hot enough.

Heat about four Tablespoons of Newman’s Own Alfredo sauce in a small sauce pan, being careful not to boil it. 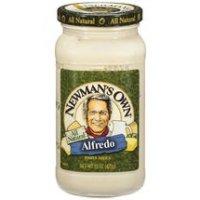 Pat down about a 1/2 pound to a pound of sea scallops (a pound is about ten scallops) with a paper towel — five each for a dinner for two. 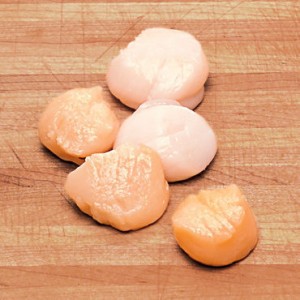 Toss a handful or two of Al Dente Spinach Fettuccine into the boiling pot. You have three minutes until it is ready. 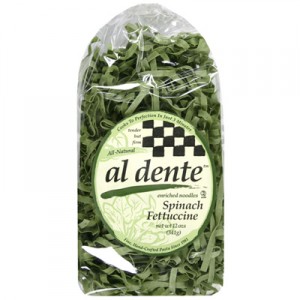 Spray a bit of cooking spray into the pan (turn on your stovetop vent). Pan sear the scallops, turning once, until both sides are nicely browned. Sprinkle with lemon juice and a bit of salt and pepper.

Drain and toss the cooked fettuccine in the heated alfredo sauce. Mound the pasta in the middle of a wide-lipped bowl. Grind fresh cracked pepper over the pasta. Add a half a cheery tomato or a peeled lobster claw or a 1/2 teaspoon of red “caviar” to the top of the pasta. (This gives you the colours of the Italian flag, that’s all.)

Arrange the sea scallops around the outside of the pile of pasta.

Serve with a buttery Chardonnay or a dry rosé and a green salad dressed with a simple vinaigrette.