Apologies for the delays these days. Mrs. E. and I have been very, very busy of late. Take that title, above. I wrote it in a haze this morning after roughly 5 1/2 hours of sleep and now have no clue as to the, no doubt vital, tale that I wanted to pass along to you. So I’ll pass along a recipe instead.

How do you feel about lentils? Yeah me, too. Shades of Neil. Which is why, when I do make lentil soup, I prefer the Spanish recipes. This will feed about six to eight adults. 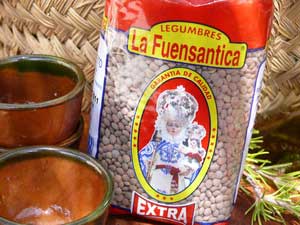 1 bag of Spanish lentils (they are brown and green and not as hard when cooked as the French version.) Pick them over to ensure they are free of pebbles.

1/2 fist of garlic, unpeeled and roasted until singed. (Over the gas hob or in a toaster oven.)

pepper and salt to taste

Put everything except the greens, olive oil, eggs and potato into a soup pot. Bring to a boil, reduce heat, cover and let simmer for close to an hour, or until the lentils are soft and almost dissolving. Stir every once in a while to prevent sticking. If the soup looks like it’s drying out, add a cup of water.

Garnish with the hardboiled eggs and serve crusty bread and an inexpensive red wine alongside.