Posted on February 24, 2011 by TheElegantologist 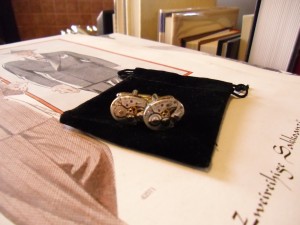 Mrs. E. found them advertised as “Steampunk cufflinks.” If you click through a number of times, you’ll notice that they are actually the works from 19 jewel Elgin watches.

Steampunk is a movement that envisions an H.G. Wells-ian and Jule Vern-ian universe where steam power is still widely used, but advances in other analog technologies are being developed. It incorporates science fiction, fantasy, and 19th century Victorian romance, as far as I understand it.

So why did I wind up with “steampunk” cufflinks? When Mrs. E. saw them, she was instantly reminded of the …. errrr… link to Gerald Murphy’s paintings, specifically “Watch” from 1925. 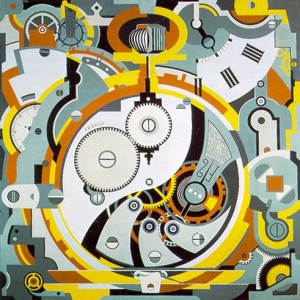 Art is subjective. So it’s nice to know your references. Head for a museum this weekend. Picasso is still here at the VMFA!