Posted on January 27, 2011 by TheElegantologist

Still at home with a sick son… which also means that my computer time is limited. Someone has taught him how to use one…. hmmmm. It is a brave new world, but I am loathe to let him surf the Wild, Wild Web (as an FBI agent once described it to me) without supervision. So, my apologies for these brief posts. I’m stealing time to work on something sartorial for later… Stay tuned. 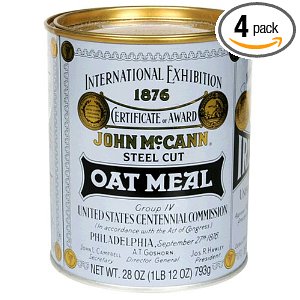 There are some mornings when I need a bit more “ooomph.” And then there are the days when I can’t stomach too much in the way of breakfast. During summer, I like to make smoothies for Mrs. E. and me. Winter is another story. Which is when, more often than not, I reach for the tin of McCANN’S Steel Cut Irish Oatmeal

. I like the heartier texture of the steel cut oats; come to think of it, I often add a handful to the smoothies. The quick cooking sort is equally good and with a splash of milk, a handful of blueberries and a bit of Truvia added to the bowl, provides enough energy for the long, dark mornings. Rumour has it that my cholesterol levels are reaping the benefit too.

A British study once found that oatmeal was the best breakfast food for the morning after the night before. With that news and the discovery that moderate consumption of red wine is good for your health, modern science has given us hope. We are truly living in an age of wonders.

This entry was posted in Living and tagged McCann Steel Cut Irish Oatmeal. Bookmark the permalink.