Frank Sinatra was known to wear an orange pocket square with his. Some of the best dressed men ever would don a red buttonhole. There are those who favour red hose with their patent leather dancing pumps. The Duke of Windsor sometimes wore a needlepoint cummerbund.

At one time, I would opt for a fancy bow tie to inject a bit of whimsy to the strict black and white scheme. I remember a grey, maroon and black, fine-striped particular favourite of mine. These days I might tuck a discreetly coloured square into my breast pocket, but more often than not, it is a monogrammed linen kerchief that I choose. For some reason, a lot of colour isn’t appealing to me as I enter my dotage.

Or so I thought until Saturday evening, when reader and friend Call Me Al, joined Mrs. E. and me for a black tie affair.

His dress set was of coloured glass. Blood red, they were a very discreet and elegant choice. 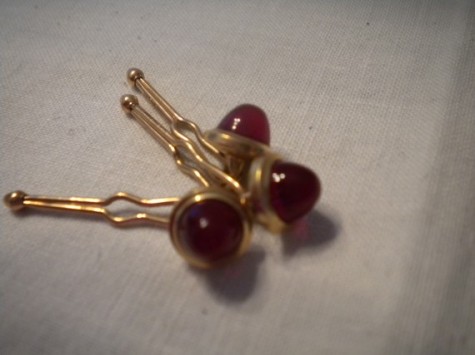 It then occurred to me that my priest also has a set of coloured studs. It is made from one of his late mother’s necklaces. Rubies with pavè diamonds — no where near as flashy as that description makes it sound.

Consider a coloured stone dress set for a dash of old world elegance.

4 thoughts on “Adding Colour to the Dinner Jacket.”