Posted on December 7, 2010 by TheElegantologist 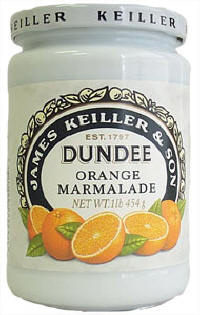 I’ve always been more of a lemon curd man, but I do enjoy orange marmalade. At least I’ve given that impression to numerous people as I always wind up with a jar or two in my Christmas stocking.  Mrs. E., having had a different sort of foreign upbringing than did I, won’t put sweet on her tartine. That leaves me with a lot of half full jars laying about the refrigerator. No real worry, I suppose, I imagine that Howard Carter snacked on orange marmalade that he found in Tut’s tomb in ’23. The stuff keeps forever and is one of those gifts that keep giving.

Still, I’ve got to make some room somewhere and that lead me to a natural, easy and elegant pairing: pork chops, Worcestershire sauce, garlic and a tablespoon of marmalade. Mix thoroughly. Coat chops, broil under high heat for about 15 minutes, turning once until they look good enough to eat.

I served the chops with Brussel sprouts that were first boiled for 10 minutes and then sautéed with bacon, red onion and a dash of duck fat. A baked apple with butter and allspice rounded out a cold night’s supper. Three dots of Balsamic glaze and some dried parsley strewn about is my attempt at presentation. 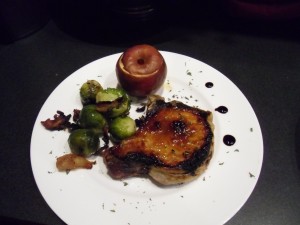 It did take the chill out of the air. At least for a bit.