Posted on November 23, 2010 by TheElegantologist 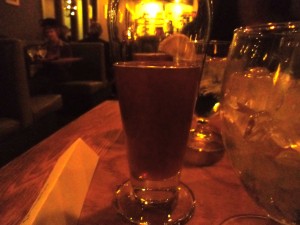 Broadbent Vinho Verde Bitter Cup, with Campari, Fernet-Branca, cranberry and grapefruit juices. The only thing I would have done differently as the bitter cup swallowed the Vinho Verde (the label of which was designed by his 4 yr. old niece!) which is the best I have ever had. I understand that it is because it is shipped here in refrigerated containers and so stays fresher. 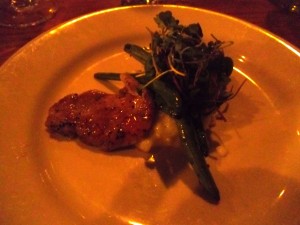 Spy Valley Riesling (so called since it comes from the Marlborough Valley where the ozone layer is the thinnest in the world and our listening posts monitoring Afgan chatter are set up here.) 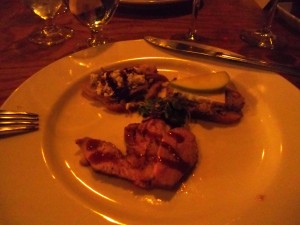 Duck Three Ways: sliced duck breast with an orange ancho chili sauce, duck liver paté crostini with Granny Smith apple and brie, and duck confit crostini with blue cheese and a cherry drizzle. (I could have eaten my weight in this course.)

[I forgot to take a photo here. I was enthralled with the wine and the ravioli was spectacular. Mr. Broadbent served the ’79 Château Musar at his wedding as the only wine. Even its younger cousin is quite interesting with lots of character. Every bottle will be different.]

Lamb Ravioli: ground lamb, raisins, walnuts and feta in a homemade ravioli with a light and creamy vegetable beef sauce. 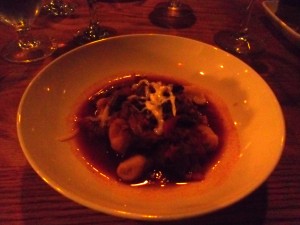 Warwick Three Cape Ladies (made by Norma Radcliffe, who was the first woman winemaker in South Africa. It is a pinotage blend, a grape which is only grown in South Africa. Three generations of this family’s women have become winemakers and hence the name.)

Broadbent Rainwater Madeira (again, no picture, sorry. Madeira, by the way, is the most American wine of all. Barrels of the stuff used to be used as ballast coming to the new world. When one ship wasn’t unloaded by mistake and the barrels made the trip twice, they discovered that the wine was much improved. Now the wine is cooked to 115ºF for three months to simulate the voyage. Our Founding Fathers toasted the Declaration of Independence and the ratification of the Constitution with Madeira. Betsy Ross had a bottle at her elbow as she sewed the American Flag. Prohibition and the phylloxera bug almost killed off Madeira, but Mr. Broadbent brought it back in 1987. Interestingly, it won’t go off once the bottle is opened and with its high acidity, it is a natural pairing with any dessert even those involving Balsamic vinegar! 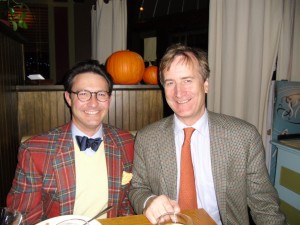 Your correspondent and Bartholomew Broadbent, well lit. His tailor is Bernard Weatherill, formerly of Kilgour. His tie is ancient and venerable Hermès. My coat by Southwick.

The bad pun above reminds me of Mr. Broadbent’s pet cause — educating the wine drinker. He points out that drinking wine for health (after all Coke is bad for you…) is best done at the lower 12.5% level of alcohol. Not only does the lower alcohol level pair better with most foods, two glasses isn’t going to hurt you. However, drink two, four ounce glasses of a wine at 14% and you are over the drink/drive limit in most states.

A word to the wise for this Thanksgiving week!

Special thanks to Chef Jeff and the staff at Avenue 805 for hosting and pairing the food and wine. It was a marvelous evening. If you get a chance to participate in one of Bartholomew Broadbent‘s evenings, do. You will have a ball and might even learn something, if you’re not careful.