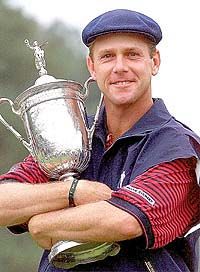 FILE — Payne Stewart holds the winner’s trophy after capturing the U.S. Open golf chapionship at the Pinehurst Resort & Country Club’s No. 2 course in Pinehurst, N.C. on Sunday, June 20, 1999. A Learjet flew uncontrolled over the nation’s heartland for hours Monday Oct. 25, 1999 before crashing in South Dakota, apparently with five people aboard. There were no survivors. Government officials feared that golfer Payne Stewart was among the victims. (AP Photo/Doug Mills)