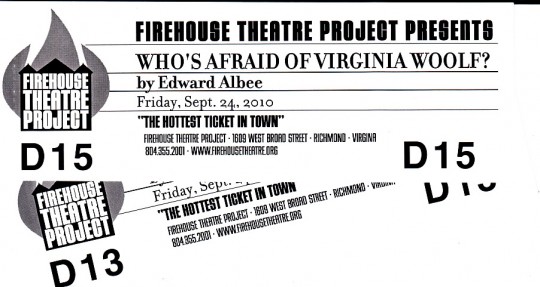 Mrs. E. and I had the pleasure of attending an incredible performance of “Who’s Afraid of Virginia Woolfe?” by Edward Albee this past weekend. If you are in Richmond, try to catch one of the last performances this week. It is worth every penny. 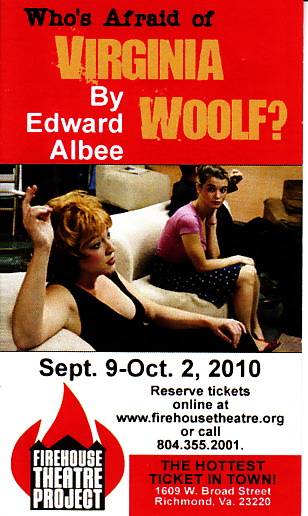 Three things struck me after we left the theatre. The first is that there is humour in the play that does not come across in the Taylor/Burton mêlée filmed for the screen.

The second was that the President of the Board of the Firehouse was flawlessly elegant when we met. You see, we know him. Rather, we’ve met him and his wife on several occasions and they are charming. That night he was accompanying his mother to the performance and, because he wasn’t with his wife, neither Mrs. E. nor I could place him. He remedied that by approaching us, shaking hands, addressing us by name and giving me his when I drew a blank. Our conversation with him and his mother was easy, fun and very pleasant. He is a perfect gentleman.

Third on the list of revelations was the impromptu drinks party we had here at The Manse with the director, his daughter, and the two leads of the show. They were most brave accepting drinks from a couple after that show… . 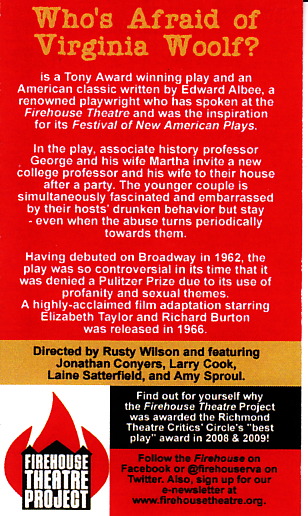 During our free-for-all conversation, Mrs. E. and I were complimented on our attire. She was in a little back dress and I wore a blue suit, white shirt with cocktail cuffs and a grey and cream tie. The actors both said how much they love it when audience members dress to attend their performances. It is an increasingly rare sight, I believe I was the only man in a tie at the show; certainly I was the only one in a suit. The women, as usual, did somewhat better.

So there you have it, straight from the horse’s mouth. While it isn’t necessary to dress to attend the theatre these days, it is appreciated by the people who have worked so hard to entertain you for the evening. This week, should you have tickets, dress a little better than you have to, introduce yourself to acquaintances with more than a nod across a crowded foyer and if you’re in Richmond, please see “Who’s Afraid of Virginia Woolfe?” at the Firehouse Theatre.