Posted on August 20, 2010 by TheElegantologist

Named for the local businessman who helped bring Trinity College to Durham in 1891 (Trinity was renamed Duke University in 1924 in his honour), The Washington Duke Inn and Golf Club will be an experience in exceptional guest service. It’s the sort of place where you are greeted by name, even though you’ve just checked in. It’s a business hotel that has embraced the casual guest without losing its efficiency or feeling that you’re traveling on an expense account.

What I particularly enjoyed, aside from the suite booked at a decent price (they match prices quoted on Expedia and Travelocity for the hotel, by the way), were the photos and memorabilia of Washington Duke’s great-grandson, playboy turned diplomat Ambassador Angier Biddle Duke (1915-1995). He was the youngest American Ambassador in history, starting his Ambassadorial career at the age of 36 and serving in El Salvador, Spain, Morocco and Denmark. He was also Chief of Protocol to Presidents Kennedy and Johnson. I’ve got a soft spot for the Foreign Service, I’d dreamed of a career as an FSO as a young man. The threat of the exam and the fact that I didn’t get into Georgetown School of Foreign Service kept me from pursuing that dream.

All that aside, the flag, keys to cities, medals and above all, the photos taken during the Ambassador’s career, are fascinating to me. As Martin Landau says of Cary Grant in “North by Northwest”, “He’s a well-tailored one, isn’t he?” (You knew that I was going to bring this all around to something sartorial, didn’t you?) Smart, too. Read the account by Ambassador Timothy Towell of a famous swim in 1966 here. 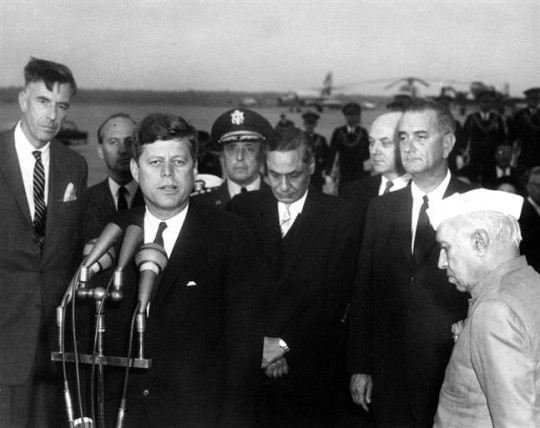 (A glimpse of Ambassador Duke just over the President’s shoulder.)

Here’s the photo I wanted to use, but it’s rights protected. None of these matches the wonderful family photos that you see lining the wall of the corridor that leads to The Fairview Dining Room at the Inn. If you get a chance to stay, take it. You won’t be disappointed.