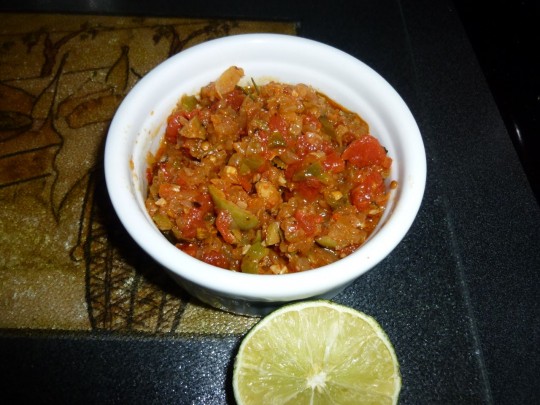 The Fourth of July celebrations left me just about grilled out. As much as I love sausages and hamburgers, hot dogs, steaks and ribs, I think we need to spend some time apart. At least for the remainder of the week. Sadly lacking on the menus this past weekend was any mention of seafood. No shrimp, oysters, fish … maybe it’s because of the massive oil spill that’s wrecking havoc on the industry and raising consumer prices. Or maybe it’s because seafood can be a bit tricky on the grill. Especially when you’re cooking for a crowd. Regardless, when my local fishmonger opened their doors later yesterday afternoon, I was one of a steady stream of customers eyeing the fillets and bivalves. There is obviously a craving to be satisfied among seafood lovers. I settled on 3/4 of a pound of Chilean sea bass.

Eyeing the thermometer in the car as it crept to 100ºF I decided on a simple stove top preparation: a Veracruz sauce. Simple yes, but it does take some work and a bit of time. I think that the sauce would go well over grilled chicken, scallops, or even hot dogs.

Marinate the fish in the juice of a lime and some salt for one hour in the refrigerator.

Chop a red, green or yellow pepper, removing the seeds and the bitter white bits.

Chop 10 large green olives (remove the pimento if you wish).

Chop 1-2 pickled jalapenõs, reserve about 2 tablespoons of the pickling juice.

Over medium-low heat, heat two tablespoons of oil in a large sauté pan (use one that has a cover). Add the onions and sauté until golden (approx. 15 minutes), stir in the garlic and cook for an additional minute.

Add the tomatoes and cook for ten more minutes. Add olives (capers if you have them go nicely, too), jalapeños and 2 tablespoons of the pickling juice from the peppers, the herbs, salt and pepper. Lower the heat and cook for 20 minutes.

Add the fish and marinade. Cover and cook for four minutes a side (turn only once). Serve with warmed corn tortillas and an ’08 Tres Pinos Tierra Blanca wine.