Pity us here on the East Coast of The United States. Today, the mercury is cooling off into the mid-nineties. It’s been brutally hot. Yesterday we set a record (104ºF) in Richmond on the fourth day straight of temperatures exceeding 100ºF. Nobody is moving as fast as Mr. Astaire there. 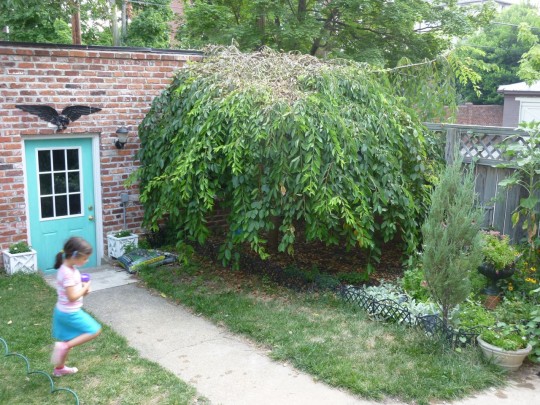 That’s Bunny, named after Bunny Wailer, the Weeping Cherry tree in the backyard. Notice the top.

Everything is wilting, and unlike Mr. Astaire, so am I.

Shirts, which I prefer unstarched, droop and cling, their collars lifeless and soaked. I can’t begin to think of wearing a jacket anywhere out-of-doors. Back in high school, I would have taken the calculated risk that we would have been allowed to remove our jackets on days like these and worn a shirt from which I hadn’t cut off the sleeves. Cut off sleeves were frowned upon, regardless of the weather.

Our teachers suffered with us, but a few of them seemed above it all, somehow removed from the heat. Mr. Reed, my English teacher, was one. In retrospect, I believe that it was his habit of wearing his khakis and button downs starched. I remember his khakis in particular were heavily starched. He was always neat as a pin.

Up the hill, there is (or was, I haven’t been for a while) a café run by another heavily starched man. He, too, stayed sharp throughout a summer evening in a small restaurant.

If you wear khakis this summer, consider having them starched. Yes, it will shorten the lifespan of the fabric, but khakis are meant to wear out and become shorts or gardening and sailing clothes. Of course, if you starch them and store them for next year, they’ll look pretty much like the pair I’ve donned, straight from my father’s footlocker. G.I., heavy twill with zippered fly, ca. 1960 something. No, they have not been tailored for me (yet). But they do hold that crease and stand away from the skin in the heat.

The question is whether I’ll be able to shift gears in the car. 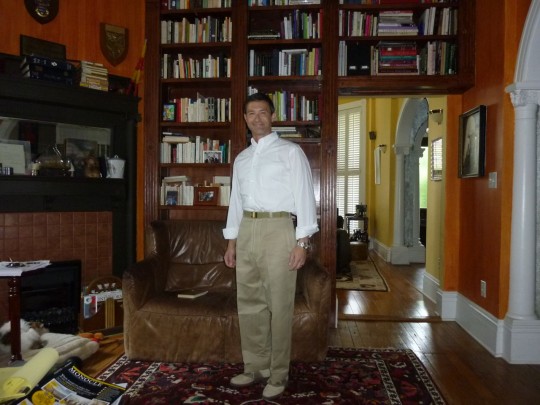 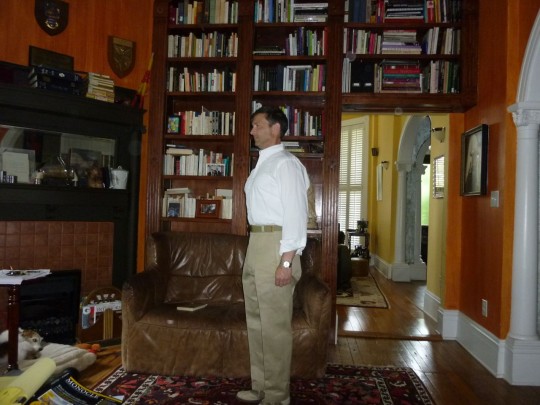 (Double click will take you to a larger image. In the right corner is a box with four arrows, clicking that enlarges it further.)