Posted on April 26, 2010 by TheElegantologist 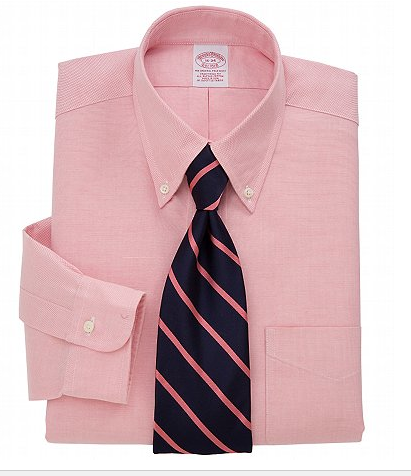 I was thinking this weekend, as I dressed for a dinner party in grey flannels and a pink shirt, and the next day as I dressed — once again in a pink (button down this time) shirt — for an ice cream social at my daughter’s school, that I wear a lot of pink shirts. They go nicely with grey suits, which I also wear a lot of, and grey flannel trousers, ditto.

“That’s a lot of pink,” said my art director one day eyeing my shirt and sweater. “It takes a big man to wear that much pink… .”

I told him that women were once forbidden to wear pink as it is a derivative of red that is the red of Mars, the God of War, and was thought to be too strong a colour statement for the fairer sex.

He remained dubious at best, but got used to me.

I have two friends who wear bowties almost exclusively. Mr. W. told me one day he was stopped by a client mid-sentence and asked why he wasn’t wearing a bowtie having chosen an ancient and venerable Hermès model from his days in New York instead. His four-in-hands rarely see the light of day these days.

The Architect, as those who know him will attest, is rarely seen shod in anything other than a pair of Belgian Shoes worn without socks. They are accompanied by perfectly pressed khakis which may or may not be in a state of distress sporting a hole or frayed cuffs.

Fred Astaire had his grey flannel suits. Cary Grant rarely strayed from his grey, white and silver palette. Having a penchant for a quirky part of your kit or donning that piece that has become your signature look is one of the perks of knowing who you are and what you can get away with. It is also one of the surest steps to developing your own style.

16 Responses to Your Signature Flourish