Posted on April 23, 2010 by TheElegantologist

For those of you keeping track, the weekend is just about upon us. Hours to go, in fact. The same holds true for summer. Well, it’s a bit further away, but close enough to start thinking of hot weather and weekends.

I thought of the weekend kit that is the ne plus ultra of American sportswear today whilst heading down Pepper Ave. to pick up my son after a field trip. There, unloading some sort of yard implement from his late-model Mercedes station wagon was the very model of summer rules. Later, reading this post by the redoubtable Tintin and experiencing an itching from the moths that have taken up residence in my wallet, I thought again of the pleasures of the preppy weekend.

Yes, you heard me right. I may not qualify as a true prep with all this Greek blood, but I prepped with them for a bit and know the animal when it steps from the dock onto dry land. So for those of you who wonder what the “well-dressed” prep wears at the weekend, it’s this:

Bermuda length, plain front khaki shorts. Either true shorts or those made from ancient and venerable khaki trousers.

Ribbon belt or one that had been needlepointed for you by a girlfriend/mother/aunt. 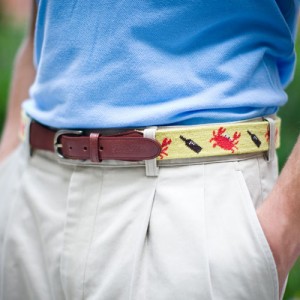 A polo/tennis collar shirt. It was either Lacoste or B² until Mr. Lauren took a turn and the pony made its appearance. Slightly frayed upturned collar and sun/salt fading optional. Or, as the gentleman spotted on Pepper, a B² OCBD, worn untucked, probably in pink or blue. Sometimes worn layered over the polo/tennis shirt in the chill of morning. 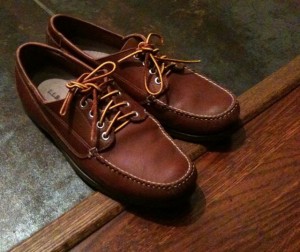 (The Bean Blucher via Nadsat and liberated for use without so much as a d’ya mind? Cheers. Let me know.)

Vaurnets or Ray-Bans on a strap so as to not lose them when tossing over (leeward) the garbage from the Bloody or the dregs from the beer (off court).

There was a brief fad for those disposable painter’s caps or sunvisors, but that was about it. A madras bucket cap was always appreciated.

It’s nice to know that certain things haven’t changed. If you can find dead-stock. 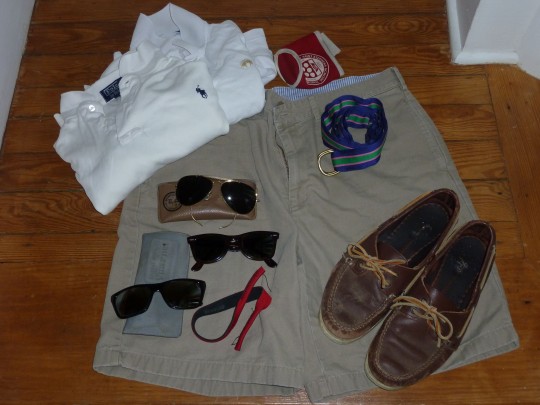 10 Responses to The Weekend Prep