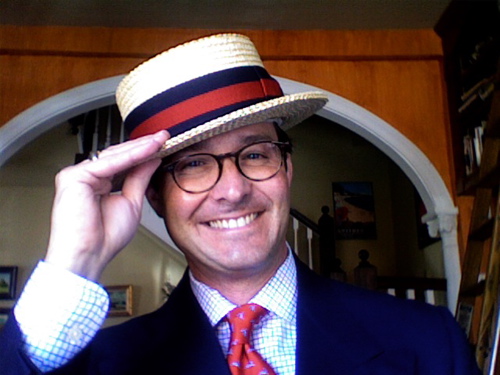 That was last year’s easter parade ensemble. I generally take advantage of the festivities and time of year to bring the skimmer/boater out of the box. I may do so again this year. Or I may go for a Panama with the Optima crown or the center crease. Maybe I’ll skip it this year and stand in the shade.

It’s supposed to be hot.

I envy the women who will get to wear sleeveless sundresses in light cotton with large brimmed open weave hats and open toed shoes; those who must carry a wrap or sweater inside in order to survive the air conditioned chill.

Which brings up the question of what is seasonally appropriate attire for the men? We are not a nation of guayabera wearers by and large and staying cool whilst remaining well-turned out can be a challenge in the warm weather. Invest in a bottle of Gold Bond Medicated Cooling Body Powder and read on. We’ll try and muddle through together.

Officially, it’s too early for white clothing. No white linen trousers (or suits), dinner jackets, spectators or white bucks. Reserve them for the summer months between Memorial Day and Labor Day, unless you’re in the tropics.

But it’s supposed to be hot. 85ºF and sunny, you protest. So, let’s wade into the murky waters of …

Seersucker. The Architect will tell you that it is too early for seersucker. There’s a lot of white in the weave and so it remains a summer fabric. And it is not yet summer.

Choose, instead, tropical weight wool, as appropriate in Church as at the porch party after. Light greys are particularly handsome to my eye. Paired with a light blue or pink tie perhaps. A pink or crisp white broadcloth shirt will round out the cool effect.

Speaking of cottons like broadcloth, your khaki poplin suit is a fine choice. Mel Gibson sweats his way through “The Year of Living Dangerously” in one. The white shirt, black knit tie and aviator sunglasses combination is classic cool in warm weather.

And there is always, always, your summer navy blazer. Hopsack, fresco, tropical weight wool and linen help to take the edge off. Pair your blazer with a jaunty and colorful bowtie or a shockingly colorful and whimsical four-in-hand.

Above I mentioned that it was too early for white linen. Yes, but I don’t see any reason to shun the fabric altogether, especially in the face of a mounting heatwave. There are a lot of colors from which to choose. Wear a solid or patterned sportcoat or trousers in tan, light blue, olive, yellow, blue or grey linen. Wrinkle away. You’ll be cooler than the masses in heavy denim jeans.

I am fully aware that you may be among the minority who have “dressed up” for the occasion. So as long as you’re turning heads, you might as well sport a hat.

11 thoughts on “What to Wear On the Avenue This Easter”