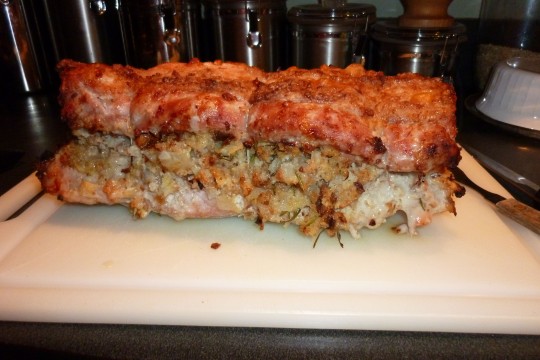 I’m Southern. I like fried food. As I write this I’m craving a fried fish sandwich. It’s just before 10 am. Not the best thing for the expanding middle-aged waistline and constricting middle-aged arteries. Remember when we used to hear about the President’s preferences for snack foods? Was it President Reagan, or was it President Bush who had a jar of Jelly Bellies gourmet jelly beans on his desk? Regardless, I believe it was President Clinton who professed a liking for cracklin’s, if I recall correctly. That would be fried pork rinds for the uninitiated and more Northern of y’all.

This weekend pork was on sale and I was preparing a menu for an impromptu dinner party. I could have pan fried pork chops, but we’re all of us watching our cholesterol levels. Then a half a pork loin caught my eye. Dinner for four with leftovers for the week for roughly USD$8.00, not including wine. Sold.

This is a very easy and because it involves a bit of a show when cut and plated, it can make for a more elegant presentation.

Using a Cuisinart, blender or tea towel and meat tenderizer/ballpeen hammer/rolling pin/what-have-you turn the dried out baguette into bread crumbs. Set aside.

Chop (or thinly slice) the onion.

Melt the butter and add a tablespoon or so of olive oil to a large skillet over medium high heat. Sauté the onions with salt and pepper just until they brown. Add the pressed garlic and sauté for a minute more. Remove from the heat. Add the breadcrumbs and mix thoroughly. Add a bit of water if it’s too dry. (Or dry white wine, if you can spare it.) You’re making stuffing, so make it look like what you remember the consistency of stuffing to be: moist.

Butterfly the pork loin so that it spread out flat (or ask the butcher to do it). Turn over and score the thin layer of fat every 3/4″ with a very sharp knife. Flip over and spread a generous layer of stuffing down the center, right to the edges. Roll up the pork loin.

Here’s the tricky part. Using kitchen string truss the pork loin. Where I made my mistake with the one above: I didn’t use enough string, tying it with four pieces only. Use nine. Eight cut and tightly tied around the circumference, one tightly tied lengthwise. It may help to have someone tying whilst you hold the beast together.

Rub the entire roast with a mixture of olive oil and salt (Kosher or sea salt is best.) Place on a roasting rack in a pan. Roast at 450ºF for 30 minutes and turn down the oven to 400ºF. Cook for another hour or to your liking. Pork can be served just the least bit pink. The loin I cooked was in the 3 1/2 to 4 lb. range and took an hour and forty minutes to cook, and another five to cool a bit (it is still cooking some during the cooling period.)

Slice and serve sprinkled with parsley. For a side dish I served oven roasted potatoes (olive oil and salt) and a salad with a based mustard vinaigrette. Small apples can be roasted alongside the pork for the last hour of cooking. Wash them and cut them across the top third of the fruit, replacing the top (you may want to sprinkle the inside with a dash of cinnamon). Place them around the pork loin and continue cooking.

We drank a fantastic bottle (or two) of ’08 Devil’s Corner Pinot Noir from Tasmania. It is very much a Bordeaux like mix. Mrs. E. prefers white and drank an equally well-matched Le Grand Cheneau Mâcon Verzé, unoaked Chardonnay (’08, Burgundy).