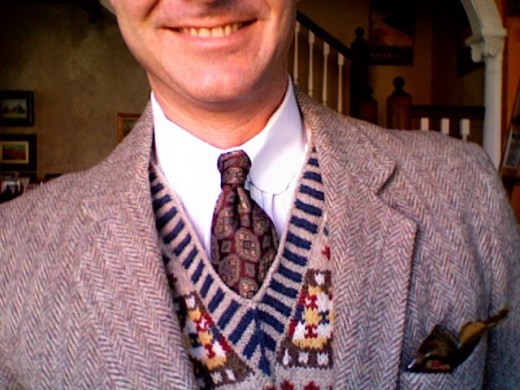 The influence of the past is with us always. Books like  Cally Blackman’s “One Hundred Years of Menswear” are particularly good at tracing the evolution of the suit especially.

After a satisfying few hours with the book (a few factual errors notwithstanding), it got me thinking about my time with Britches of Georgetowne, the basis of my sartorial aesthetic and my wardrobe in general.

I’m a big fan of two decades when it comes to menswear. For those of you following closely, you will have noticed it most in my choices of eyewear. There is the Bertie Wooster/Fred Astaire/Duke of Windsor/Fellowes influence and the Cary Grant/late 50’s/Early 60’s influence. (With a stop along the way for the Mods and the Neo-Edwardians like Cecil Beaton and Bunny Rogers ca. 1954).

The difficulty has always been reconciling the two looks with the modern era. Not so much the man in the grey flannel suit who has never really gone out of fashion in the business world, but the elegant lines of the others were often in conflict with the reigning aesthetic of the day: the sack suit, for example. Enter Britches, an early adopter of the Ralph Lauren/Alan Flusser aesthetic. Suits were drapey, patterns were mixed and matched, shoes were brown and often suede. Heady stuff in the D.C. area in 1980 when I first was introduced to Mark Wilson and my tailored and forward pleated khakis that were to be a staple of my school wardrobe.

Take a look at today’s motoring wardrobe above. It was a bit cool, but I knew that I’d have the sunroof open. The tab collar, tweed jacket and Fair Isle sweater were accompanied by a tweed cap and brown leather gloves to ward off the chill coming through the open windows. A fine look, in my opinion, but a bit anachronistic for everyday wear. Venture outside and you will get looks. So, how to “update” the tab collar, brown trousers and brown shoes is the question.

Now and then, pair them with something “safe” like the perennial blue blazer. Yes, you will get comments, but the second glances will be more admiring rather than questioning. To save a day’s dress from looking too costume, always anchor your choices with a traditional, tried and true classic.

4 thoughts on “Now and Then”