[Ed.: It’s Mrs. E.’s Birthday tomorrow — and Corporate Creature’s!– so much goings on in store. Forgive me if I leave you with the words of others. They are worth thinking about and perhaps together we can turn back the rush of “progress” just a bit.] 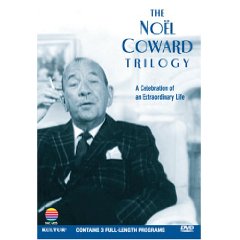 “It was a world being made for the Angry Young Men, not the Bright Young Things.” One of Noël Coward’s biographers on the world after WWII, speaking on camera in The Noël Coward Triology.

“He had not expected to become the last romantic hero. This was, after all, supposed to be the dark decade of , in his own words, ‘the blue jeans, the dope addicts, the Method’, a grim period in which Hollywood tried to switch from glamour to grit, from romance to realism, to project, as Tom Wolfe put it,’an awesome montage of swung fists, bent teeth, curled lips, popping neck veins, and gurglings’. Heroes were out, anti-heroes were in. Real men were now supposed to be in the grip of existential angst, not romantic ardour. Wolfe called it ‘the era of Rake-A-Cheek Romance on the screen. Man meets woman. She rakes his cheek with her fingernails. He belts her in the chops. They fall in a wallow of passion.’ This was not supposed to be an era in which Cary Grant would survive, and yet he did much more than survive: he went from strength to strength, setting new box office records, attracting increasingly warm reviews and appealing to, if anything, an even broader range of fans than before. He was still there, on his own, ‘a peerless creation, a worldly, sophisticated man who had become more attractive with the years.’ The new trend for callow rawness and nervy lubricity served only to underline the allure of Grant’s exotic elegance. The more fidgety other men became, the more relaxed he looked. ‘He knew he’d perfected it,’ a critic observed, ‘and not only perfected it, but patented it. And you’d never be able to spot the join between reality and illusion, however much you strained your eyes.’