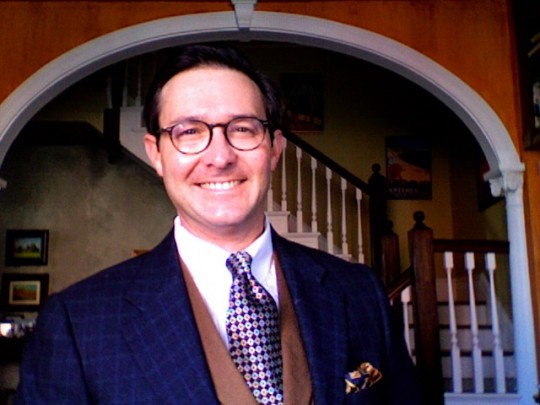 Rory Sutherland’s speech at TED, which I posted yesterday, and M. Lane’s post, got me thinking about one of my favourite subjects: the way that people see you. Or, in marketing/advertising speak: perceived value.

I think I’ve mentioned before that my former boss, the Creative Director at a famous agency’s outpost in Washington, D.C., was given a clothing allowance after I went to work for him. I was the only guy in creative who could get a taxi to stop for us. In short, I was “dressing above my position”. My argument was that Creative always was given leeway with the dress code; look at your average art director or designer… .

At a party a while back, I struck up a conversation at the bar table with a very conservatively well-dressed man. He was the very definition of Trad and I’ll bet that his suit was made by Chipp. He began to tell me of the heady days of investment banking, and mentioned a few names we might have in common… No? Then a few Manhattan spots that I might have frequented? No? He settled on “whatever happened to rational thought?” I listened. It turns out that he had an advanced degree in philosophy or something akin. He ended a query with “look at the way you’re dressed; you are obviously part of the well-educated, successful elite of this country.”

Err… Well-educated despite my best attempts. Well-dressed perhaps. That’s about as far as I would go. But, I kept my mouth shut rather than embarrass him for his obvious error in perception.

“Oh for God’s sake,” Mrs. E. will exclaim. “You’re going to Lowe’s. Must you shave and change?” When I wander a store these days, I am frequently mistaken for part of the staff.

Don’t forget, Cary Grant parlayed his ability to look stunning in evening clothes into a career as the world’s most elegant man. His upbringing wasn’t exactly of the port-out-starboard home variety. But he knew a thing or two about image. In these days of the personal brand, your wardrobe is a good place to start branding yourself.

Small details make the difference. Elegance is attitude. But your clothing is the first thing that is judged. Another good reason to dress just a little better than you have to.

22 thoughts on “Perceived Value. What Your Clothes Say About You.”