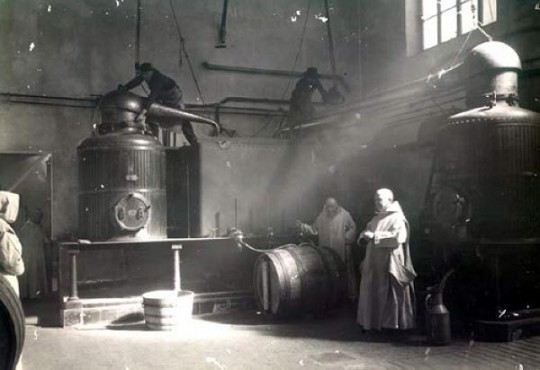 This is what happens when you set out to do one thing and get sidetracked by a bar book. I started to look up the true definition of a “mist”, which turns out to be any shot of straight liquor poured over crushed ice sometimes garnished with a lemon peel. It also turns out that some mists are made with more than one kind of liquor, especially if the booze isn’t that flavourful to begin with. Vodka should take a bit of… you guessed it… vermouth, for example. Anyway, the next page after mists gave a listing of cocktails that defy categorization. There on the second page, page 79 of the “Playboy Bartender’s Guide”, is the recipe for a Carthusian Cooler.

Back during those foggy school days, a man could get gang stomped for putting anything at all into his bourbon except more bourbon. There were exceptions. I was forgiven the ice cubes in the tall glass of Wild Turkey 101 — the ” Hunter S. Thompson Variation” we called it. But the idea of adding Coca Cola or Ginger Ale outside of a stadium just didn’t seem cricket. I’m older now and take my drinks any way I please, so the idea of a cocktail made with bourbon, using some Chartreuse that needed to be drunk up as it was low in the bottle and oxidizing, seemed pleasing indeed.

The Chartreuse I had on hand was green, not yellow. The Bourbon is Wild Turkey 101. I was fresh out of Club soda (oh for those heady days of making my own!), and lemons (used in the Chartreuse Cooler detailed immediately below the Carthusian Cooler recipe.) What to do?

Herewith, I launch upon an unsuspecting world the Thompson variation if you will:

Break off a big hunk of ice and drop it into a double old-fashioned glass. Add:

You may top with a splash of cold water. I didn’t until the second drink. Do not have the second drink if you plan to do anything productive, like make dinner, immediately following the blue hour. While Yellow Chartreuse clocks in at 40% (80 proof), the Green version stands at 55% (110 proof). Who knew?