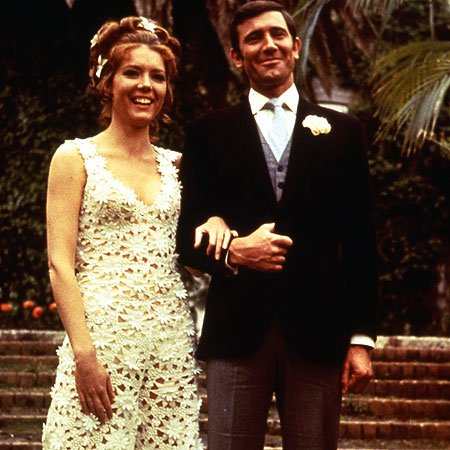 (Mr. & Mrs. James Bond from 1969’s “On Her Majesty’s Secret Service” Image: ©Danjaq/EON Productions and used without permission. Let me know and I’ll take it down.)

I can count my best friends on one hand. I’ve been present at all of their marriages. One in an historic town house turned Inn (where I got a glimpse of what a wedding can be among friends), one in the islands (where I learned what “jet-set” really means and that true friends are those with whom you can travel), and one here in Richmond, in the mid-morning, which is by far the most elegant I’ve witnessed.

Here’s why you should consider a morning coat and a morning wedding.

It was at the end of January. A blizzard threatened. Miraculously, the weather broke for the ceremony and it was sunny and warm. We, the groom’s men were in traditional kit (the first time in innumerable weddings that I’ve worn a cutaway.) The groom, as a gift to us, had selected the B-Squared ties that we were to wear with our morning suits: grey with a woven ecru dot. He wore a woven, sky blue number with a neat dark blue geometric; I bought one myself and will wear it the day of their anniversary. The bride wore the same wedding dress as her mother and older sister had before her. The choir was in fine voice and the groom still plays the recording each anniversary. My mother-in-law, a layperson, was the crucifer.

These, then, are the elements of a classic morning wedding. Having been married once in the late afternoon and once at night, I can highly recommend the morning wedding. There is less time spent twiddling your thumbs waiting for the big event. Besides, the men get to wear morning suits and how often do you get to do that? I really like the individuality that allowing your groomsmen to choose their own ties brings to a very formal event. It injects a bit of festivity to the proceedings. And the best weddings are always fun. 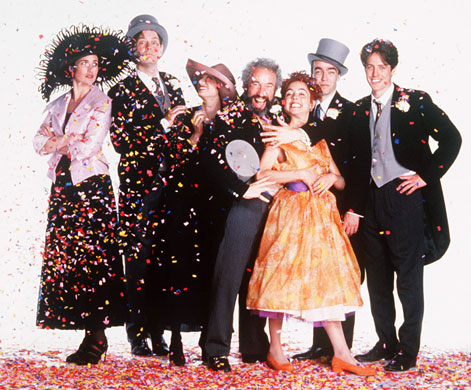 After the sun dappled ceremony, we all repaired to The Jefferson where we were treated to a seated Champagne brunch. Really the most civilised of meals. The newlyweds stayed the evening and we met them the next day for luncheon in the middle of a blizzard right before they left for London. It was, in retrospect, one of the most stylish weddings I’ve ever been privileged to attend.

14 thoughts on “A Most Elegant Winter Wedding”