‘Tis Better to Give

Posted on December 16, 2009 by TheElegantologist 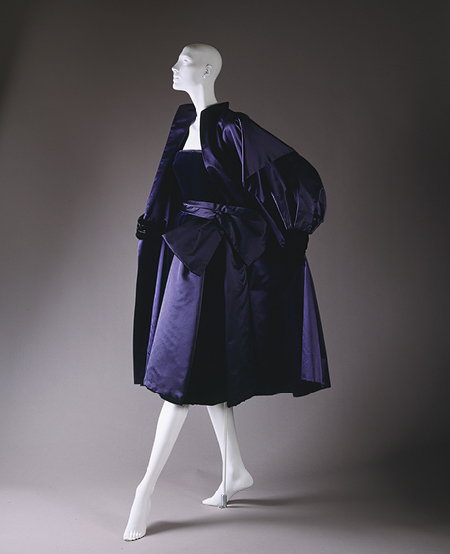 (Image: The Metropolitan Museum of Art)

Gentlemen, this is the time that all good men should rise to the aid of the other party. In other words, it is time to pony up for a few extravagances and thoughtful gestures for your significant other.

Mrs. E. hates to shop. Can’t stand it. Doesn’t mind the hardware store, but that’s about it. I am the one more likely to be found perusing the isles at antique stores, clothing boutiques and food emporiums. As the party season is in full swing here in Richmond, I find that it is a wonderful time to present Mrs. E. with a new frock. When is the last time you did the same for your better half?

The cocktail dress is a favourite of mine. Probably because it is called a cocktail dress and so connotes fun and frivolity — a flirtiness if you will — that the more serious ball gown does not. As with most things that I love, the cocktail dress is rooted in the 1920’s when the modern woman began drinking with the men. Creations of the time were more modest, walking the thin line between day and evening wear, slightly more ornamentation and a darker luxurious fabric than daytime clothing, not as fully embellished as evening’s ensembles. French beach pyjamas were popular.

By the 1930’s the American sporty chic were mixing separates for the blue hour and Coco Chanel’s cocktail suits were a natural fit, easing the transition from tea to drinks to an intimate dinner. The Great Depression had its effect and “day to evening” dresses were the result. Instead, accessories were emphasized, the hat and gloves for late afternoon and early evening, the costume jewelry brooch for drinks. The length of the sheath dress was to the ankle. Rhinestone buttons on a colourful day suit designated it a cocktail suit.

Then the 1940’s ushered in the cocktailing culture full-force and it was Christian Dior who first dubbed his creations “cocktail dresses.” The rounded shoulders, cinched waist and very full skirt that fell to mid-calf of the Dior New Look stayed the fashion until the late 1960’s when the slimmer line was fashionable and then the jumpsuits of the Pucci era splashed onto the scene. Ah well…

Today a New Look cocktail dress with a tiny matching bag just big enough to hold an iPhone, a compact, lipstick, a key and an AmEx paired with dyed-to-match shoes and gloves is probably a bit too much to hope for. The LBD, “Little Black Dress” has carried the day — not that I mind them at all, but something a little different is always nice to see — and is firmly rooted in our psyches as the cocktail uniform for women.

Unless we’re doing the buying.

Go for something that is cut to about the knee. Pair your purchase with a new book dedicated to the topic. The Cocktail Dress

by Laird Borelli-Persson. The delight in her eyes will be well worth it.

For more on the history of the cocktail dress please click over to the Met.

3 Responses to ‘Tis Better to Give