Suburban Henrico, We Can Do Better

Posted on December 2, 2009 by TheElegantologist

This is what happens when most people don’t know anyone who has served our Country, let alone with honour. NOT our finest hour. 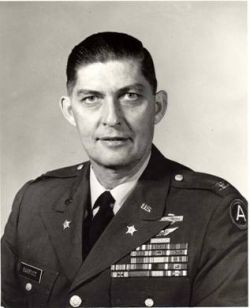 In a five-paragraph letter to Barfoot that he received yesterday, Barfoot is being ordered to remove a flagpole from his yard. The decorated veteran of three wars, now 90 years old, raises the American flag every morning on the pole, then lowers and folds the flag at dusk each day in a three-corner military fashion.

In a priority mail letter, the Coates & Davenport law firm in Richmond is ordering Barfoot to remove the pole by 5 p.m. Friday or face “legal action being brought to enforce the Covenants and Restrictions against you.” The letter states that Barfoot will be subject to paying all legal fees and costs in any successful legal proceeding pursued by the homeowner association’s board.

Barfoot lives in the Sussex Square community in far western Henrico; its board of directors rejected a plea from Barfoot in July to approve the pole, disallowing the fixture on aesthetic grounds.

There is no provision in the community’s rules expressly forbidding flagpoles, Barfoot’s daughter said. But she said the board ruled against her father’s fixture and ordered it removed in July, deciding that free-standing flag poles are not aesthetically appropriate. Short flag stands attached to porches dot the community.

“Dad sort of feels like this is the end,” said Margaret Nicholls, Barfoot’s daughter, who lives a few doors away. But she said this morning that she and her husband are attempting to generate support for her father’s cause, a flag-raising rite that he has undertaken for most of his life.

Barfoot received the Medal of Honor on the battlefield during World War II in Italy and fought as well in the Korean and Vietnam wars. A portion of a highway in rural Mississippi, his native state, was named in his honor this fall. A building at McGuire Veterans Hospital in Richmond also carries his name.

He said in November that not flying the flag would be a sacrilege to him.

“There’s never been a day in my life or a place I’ve lived in my life that you couldn’t fly the American flag,” he said.

Later in his life, Van Barfoot would be hailed as one of the significant Native American heroes of World War II. His grandmother was a full-blooded Choctaw but his mother failed to enroll him with the government as a member of that tribe, so Barfoot grew up aware only that he had American Indian blood, not that he was an “official” Choctaw.

He enlisted in the Army in 1940, before the new selective service law authorizing the peacetime draft was passed by Congress, and he was assigned to the 1st Infantry Division. After his training, he participated in maneuvers in Louisiana and Puerto Rico. In December 1941, he was promoted to sergeant and assigned to the newly activated Headquarters Amphibious Force Atlantic Fleet at Quantico, Virginia. When the unit was inactivated in 1943, he was reassigned to the 157th Infantry.

Technical Sergeant Barfoot took part in the landings at Sicily in July 1943 and at Salerno two months later. In late January 1944, the 157th landed at Anzio and began moving inland rapidly. But counterattacking German reinforcements stopped the Allied advance, even forcing some withdrawals. By May, Barfoot’s unit had been in a defensive position near the town of Carano for several weeks, during which time Barfoot conducted day and night patrols to probe the German lines, mentally mapping out the terrain and minefields in front of enemy positions.

Early on the morning of May 23, his company was ordered to attack. As the lead squads approached the German minefields, they came under heavy fire. Because he knew the lanes through the minefields so well, Barfoot asked for permission to head a squad. Moving through depressions in the terrain and shallow ditches, he advanced to within a few yards of an enemy machine gun on the right flank and destroyed it with a grenade. Then, following the German trench line, he moved to the next gun emplacement, where he killed two soldiers with his submachine gun and wounded and captured three others. When he approached the Germans manning a third gun, they surrendered. In all he captured seventeen of the enemy.

Later in the day, after he had consolidated the newly captured position. Barfoot, seeing three German tanks advancing in a counteroffensive, grabbed a bazooka and destroyed the track of the leading tank, causing the two other tanks to change direction. As the crew of the disabled tank jumped out, Barfoot killed three of them, then continued into enemy territory and destroyed a German fieldpiece with a demolition charge. He ended the day by helping two seriously wounded men from his squad walk nearly a mile to safety.

Not long after this action, Barfoot was promoted to lieutenant. Four months later, his unit was in France’s Rhone valley when he was ordered to division headquarters and informed that he had been awarded the Medal of Honor. Given the choice of returning to the United States for the ceremony or receiving the medal in the field, Barfoot chose the latter so that his men could be present. Lieutenant General Alexander Patch awarded him the medal in Epinal, France, on September 28, 1944.

26 Responses to Suburban Henrico, We Can Do Better