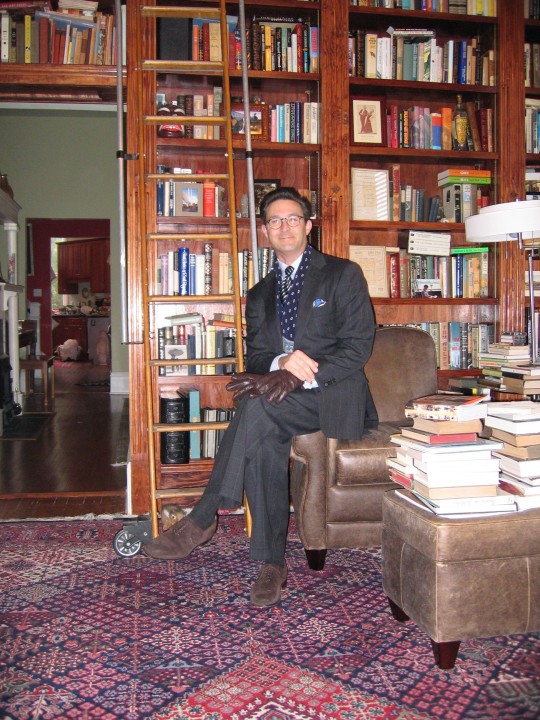 This time of year presents problems, sartorially. At least in Virginia where the mercury is… well … mercurial to say the least. Awaken to temperatures in the 40ºs (F) and by lunch it is close to twenty degrees warmer. And if you commute by car, leaping in and out whilst wearing your topcoat can get annoying. Even a carcoat becomes a burden later in the day. I remember those crowded and steamy Metro rides into the District back when I was gainfully, if not well-, employed. But I soldiered on, ending the day with my coat draped over my arm and praying for a seat.

That’s when I should have turned instead to a hat, a scarf and gloves. All of which could be chucked into the shoulder bag at the end of the day. On a brisk morning, the even brisker walk would have kept me warm enough and the scarf would have provided the extra layer of material against my chest.

Yesterday’s choice was a silk scarf from the 1930’s that belonged to my grandfather, who was about as sartorially resplendent as a Maryland State Trooper could get. But it was the Golden Age of menswear when everyone aspired to elegance. I also have his Optima Crown Panama purchased in Havana, Cuba in ’58-’59, a wash and wear dinner jacket for travel, over the calf motorcycle boots and a bowler/derby/Coke hat purchased in New York City. How many men, let alone cops … well anyway.

The silk scarf is the lightest of the dress scarf choices, particularly if it is doublesided and not backed by wool or cashmere. It is still surprisingly warm, but that is the nature of silk and why I recommend silk base layers during winter. Silk is also luxurious to wear and so a good companion to the more casual blue-grey windowpane flannel suit seen above.

I debated about the gloves, grey suede? Yellow chamois? But stuck with a traditional dark brown calf lined in cashmere to serve as a counterpoint to the chocolate suede shoes and the alligator watch strap. A hat, should I have worn one, would have also been brown. The combination of gloves, the flannel suit and the silk scarf kept me very comfortable throughout the day, from car trips to a three block walk to my tailors.

If elegance is simplicity, the silk scarf and gloves qualify as one of the easier way to achieve it. And this is the easiest way to wear them both.

8 thoughts on “The Thinnest Layer: The SIlk Scarf”