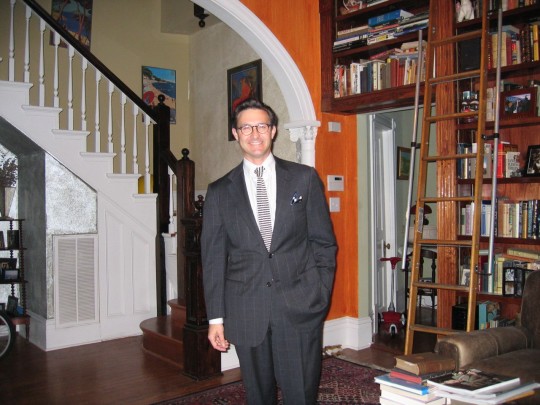 It’s going to be warmer today, but yesterday…. Fall fell with temperatures in the mid 60 degrees Fahrenheit. Perfect weather for what may be the perfect fabric. At least in my swatch book. Wool flannel. I’m in that suit at the end of a very long day made more bearable by the fact (in this case) that the combination of Italian tailoring and flannel makes a suit feel as comfy as a pair of pyjamas.

Flannel is “lofty” in tailor’s speak, meaning that it thick and resilient to creasing. In fact, unless the flannel is worsted, it might not take a crease at all.

Look up “lofty” in an online dictionary and you’ll find this:
2. exalted in rank, dignity, or character; eminent.
3. elevated in style, tone, or sentiment, as writings or speech.

I’ll agree that both definitions apply to this delightful fabric. It is at once exalted in dignity and character and elevated in style. Funny for stuff that began life as the material for undergarments and moved into sportswear. Cricketeers were supposed to be the first to wear flannel on the pitch, the bowler in a white flannel jacket with three patch pockets, the batsman in white flannel trousers and open necked shirt.

That athletic past may be why Fred Astaire preferred his suits to be made of the good stuff. That was a man who knew how to move in a suit, and how a suit has to be made to move with him. He became so associated with the fabric that Audrey Hepburn wrapped his picture frame in grey flannel. I wonder if it was chalk-striped?

There’s another great thing about this fabric whose earliest mention in literature may be in Chaucer. You can dress it up, or dress it down. Wear a suit with a cashmere turtleneck and suede shoes (Astaire in one of his earliest film appearances did.) Or give it the full British treatment of black captoes, spread collar, polka dot tie and white linen square. Wear flannel trousers with a cardigan or tweed jacket. Yes, the woolen fabric known as flannel is a safe bet for the boardroom, ballroom and bedroom (they make pyjamas and robes out of the stuff, too. Usually in cotton flannel though.)

Have at least one flannel suit and a pair of flannel trousers to your name.

5 thoughts on “Not Very Wild and Wooly”