That title is a little misleading. Mrs. E. and were fortunate enough to be invited to a private concert, held in the gardens of a home not far from The Manse.

While the music wasn’t the sort that we would normally choose to listen to, it was nonetheless fantastic. Authenticity is never to be missed. Tim Grimm, writer and performer of classic Americana ballads, is nothing if not authentic. He chucked in a film career in Hollywood to get back to a simpler way of life and write his music. Up close, in a quiet garden with about 40 people listening, he could interact with his audience and drew us all in with his story telling. For a brief instant I felt like packing it in and heading for the country myself. That moment passed. I am a city dweller and suit wearer. But that’s how charismatic the man is.

I bring all this up, because I can’t remember the last time I attended a private concert. I think it is a wonderful idea for a party; especially if you have friends who play music. Follow the simple blueprint of the party we attended for a guaranteed success.

Inside the sun room were two tables, one set up with wine and glasses, the other with Bloody Mary makings and ice. Continuing in to the dining room, a buffet luncheon of four different quiches, an orzo salad, a green salad, fruit tray and small desserts was arranged on sideboards and the dining table. The china was mixed, as were the napkins and cutlery. (The food was all homemade — 15 quiches were baked in all.)

Outside a table was set up with a few cold patés and dips, soda and bottled water and ice. A wheel barrow held ice and bottled beer. Hired banquet chairs were arranged in a semi-circle facing the performance space. Several occasional tables and the garden furniture had been pressed into service as well. Plenty of shade was provided by mature trees and sunshine was welcome on a breezy 72ºF day.

Inside, you could have much the same setup and invite fewer people if seating is an issue. But the combination of good food, friends and live music is hard to beat. This year at New Year’s, I’m going to see if we can cajole a friend or two to sit down at the piano with the Cole Porter Songbook… Think about hosting your own private concert.

Mr. Grimm… from that party. Thanks Jon! 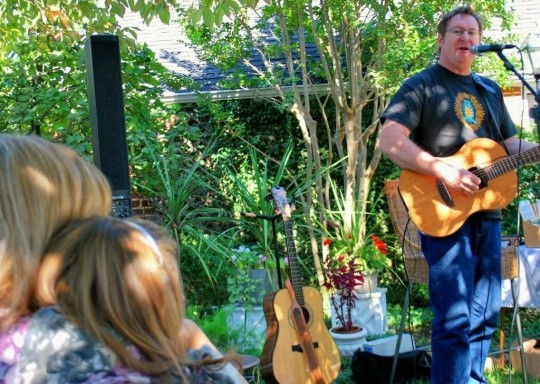 8 thoughts on “I Went to a Garden Party”