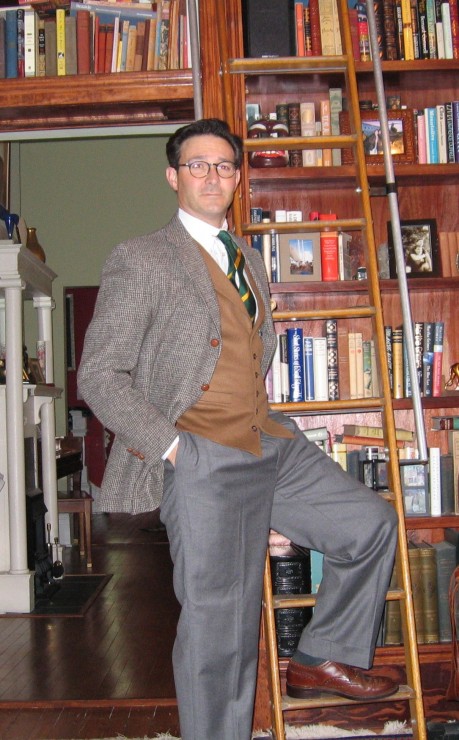 Forgive the photo, I was running out the door and didn’t notice that my tie was askew. Sprezaturra? No. Completely unplanned. As was the imperious expression that was captured just as the battery died in the camera and shut down the shoot.

The odd Harris Tweed jacket was given to me by my Uncle when I was in the upper school at SSS sometime around 1983. Replete with throat latch, it is made for blustery, chilly days, of which we have had quite a run lately. Interestingly, it is quarter lined. Making it a bit less warm than 16 ounce (?) tweed should be. And that’s where the odd vest comes into play. It’s a cashmere thing that is cut a shade too long, but would work well with today’s lower rise trousers. Since I had the flannels made, they are sitting at my proper waist and the whole is a bit off. But close enough for government work, as they say.

The funny thing about stalking about in tweed is that I am not exactly the country squire type. But tweed, and especially old tweed, feels great. It feels like it can take it and push back if need be. I wish I had a three piece suit of the stuff. Preferably some outlandishly brown and orange hairy wonder. (No camouflage here in what I call a city, however you might think of Richmond, I suppose I would be accused of putting the “twee” back in tweed.) Indestructible, like an ancient leather jacket, or cordovan double sole brogues (see photo above), tweed becomes an old friend, a stylish companion to jeans (or over a jean jacket as photos of my teenage years will attest), khakis, corduroys, moleskins, flannels and cavalry twills. Dress it up. Dress it down. Wrap it around a cashmere sweater to protect that delicate fabric and waterproof it with a waxed cotton Barbour and you’re set for adventure.

Maybe my affection for tweed stems from its being made by hand. Harris Tweed, stamped and certified, has to be produced using whatever wool, moisture, twigs and berries can be gathered in something like a twenty foot diameter on one of those isolated rocks of an island in the Outer Hebrides. There is a real art here.

And as Oscar Wilde famously said, one should either wear a work of art or be one. Many may call me a “piece of work”, but few a work of art.

Which is why I wear tweed.