Posted on October 15, 2009 by TheElegantologist 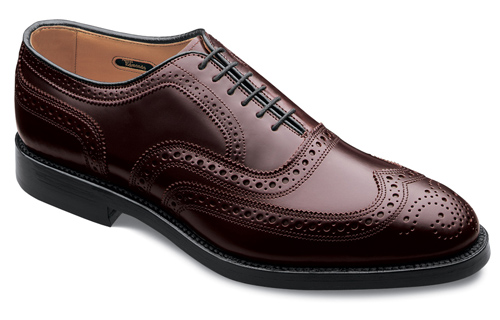 Yesterday we began discussing the smart casual look with the polo neck sweater. I alluded to my suede brogues which brought up another thought. What shoes are considered casual? And no, we won’t get into sneakers/trainers unless we are discussing exercise gear or boating.

The image above may seem out of place.

It may surprise some to learn that the full brogue, the “wingtip” was actually a casual shoe once upon a time. In fact, semi and full brogues are still not properly worn after six o’clock in the evening. Full brogues were invented by the Irish who punched holes in their leather shoes to let them dry quicker after being soaked in the bogs in which they worked. The style caught on with ghillies and gameskeepers for hunting purposes. Then the shoe was noticed by the aristocrats who hunted with them and …. the full-brogue was adopted and began to be refined for the more elegant man. It was the Prince of Wales, not surprisingly, who first wore the shoe onto the links, scandalising society (how his eyebrows would raise today!) He became very fond of wingtips/brogues and wore a sleeker version with lounge suits. Because he did it then, we do it today. But brogues started life as a hard working and sturdy shoe, then sports shoe. Casual. You can tell a full brogue by the wings that extend back from the toe cap. Semi-brogues (punched captoes) have a straight seam across the toe cap. 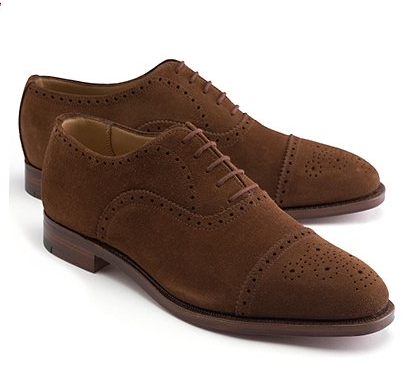 Today, both styles are synonymous with business suits. Both are equally at home under jeans. Preferably worn highly polished to play against the rougher and matte texture of the denim or in brown suede to highlight their casual nature.

The split toe blucher or Norwegian is another shoe to consider. Also known as a variation on the Derby (with the open lacing system whereby the quarters can be adjusted by using the laces), the split toe is a very casual shoe and is often made in very casual leathers, Scotchgrain (a pebbled leather) for example. They are also characterised by a moccasin like seam on the front of the shoe and that distinctive seam that divides the toe at the front running to the sole. Even a heavier sole or a chunky tread like a Vibram works well with this model. I think the shoes work well under heavy corduroys.

Since we’ve introduced the Blucher/Derby, a plain front version is a favourite of mine. I won a wonderful cognac coloured Scotchgrain pair with a Vibram traction sole (old Ferragamos) and a pair of black, plain toe double soled Paul Smith’s (gift of a friend) which feel indestructible. I feel very comfortable wearing them with a pair of jeans, tweeds or cords. Trousers of heavy material suit the heavier look of the Derby.

That’s not to say that the plain toe Derby is strictly a roll-up-the-sleeves utilitarian shoe. 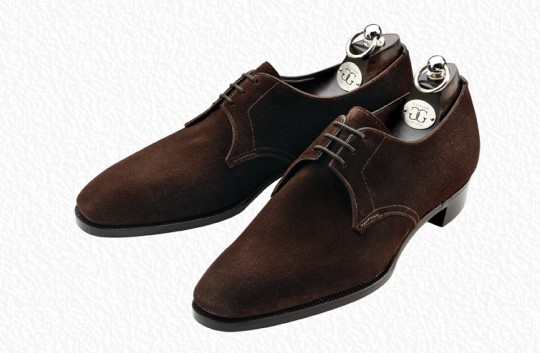 Slip on shoes are very stealth elegant. Very under the radar. Very unexpected. They are essentially a wingtip where the laces have been replaced with a side panel of elastic gore. Slip ons are great to fly with since they can be slipped into and out of and still have that business look to them. I’d try a full-brogue model. Great with suits or jeans. 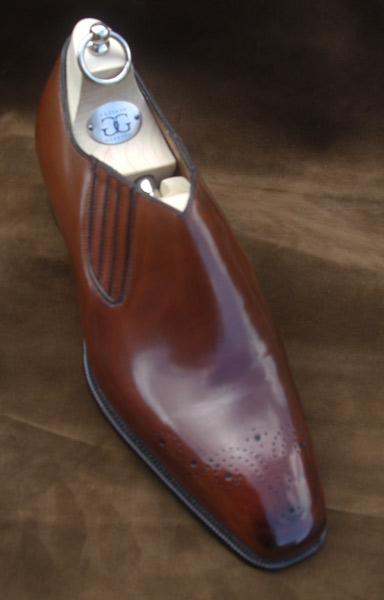 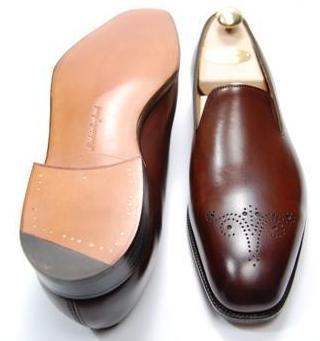 You already know all about loafers. There are penny loafers, Venetian loafers, driving Gomminos, Belgians, tassel, kiltie and bit. But I make no apologies for my unabashed love of the monk strap. Great with everything from a blazer and flannels to cords and a sweater or jeans and a flight jacket. I even wear them with suits, just for … er… kicks. R. Martegani does a fine version.

As does John Lobb, of course. 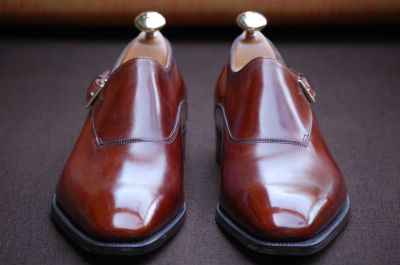 Who needs flip-flops outside of the pool? Casual elegance made easy. Try a pair of beautiful shoes.