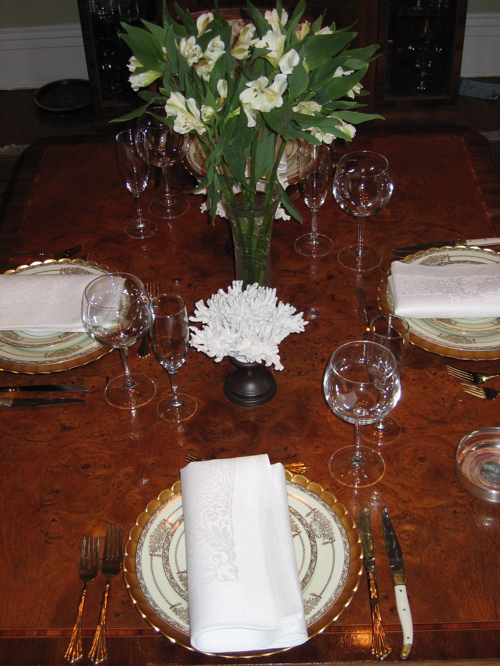 Reading through “Arabella Boxer’s Book of English Food” (thank you Aesthete; you really should be recompensed by one industry or another), I was struck by how many things have changed since the halcyon days between the wars. Not just the diet, but the manner of entertaining, the way people lived and how they decorated. A case in point:

One of the guests, Lady Mildmay, commented: ‘The dinner table was one solid mass of gold plate, and the flowers were too lovely, yellow daffodils, blue iris and very golden mimosa. Everyone said the dinner was the best they had ever eaten, but I do not really agree. There were six things in succession, all hot, and the peas were quite uneatable.
(‘A Dinner at Buckingham Palace, March 1927′ from the Introduction to “Arabella Boxer’s Book of English Food: a Rediscovery of British Food from Before the War.” Hodder and Staughton, 1991, p. 26)

Admittedly, the dinner was at Buckingham Palace. But it does sort of prove a theory of mine. For the most part, even if you are serving very simple foods, serving them in as grand a manner as possible leaves your guests with a very favourable impression of the dinner as a whole. (A corollary is my father’s edict “starve ’em, soak ’em and anything will be a masterpiece” is also a good thing to remember.)

So, in honour of a friend’s birthday, I decided that we would be guilty of serving very simple fare: steak au poivre, creamed spinach, horseradish mashed potatoes, and tiramisu. AIl on cream and gold Lenox with gold plated cutlery.

You don’t see much gold plate these days. Old silver, repeatedly polished to a fine patina, is much “richer” looking. But, with the lights low, candles lit and against the cream of the china, the effect can be quite striking. It would have been even more so had I used the white damask tablecloth, too.

Whatever you choose to lay the table with, do so with as much ceremony as you can muster. Even the simplest fare takes on a special flavour when elegantly presented. Even if the table is simply set with freshly cut and arranged flowers, starched and pressed napkins (check your antique store for good deals — no one wants to have to clean and press them and you can find good deals) and wine glasses, like mine above, from Target.