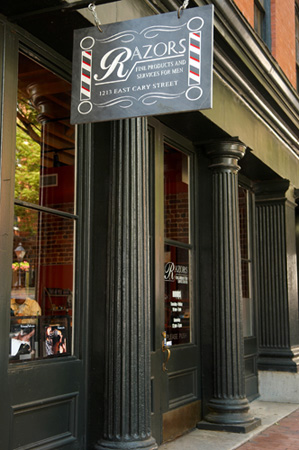 Today is one of those days. The sort that has me in a lather as I’m going to have to deal with the state government, my bank, etc.. Not my ideal day. So I thought that I might inject a little relaxation into the early portion of it and treat myself to a wet shave with a straight razor.

My first shave was at Nordstrom. Yes, that Nordstrom. The man who had been the White House barber was practicing his craft in the men’s department. As far as publicity stunts go, it was a good one. So was the shave, which was accomplished with a disposable plastic model because of local ordinances. I asked who the toughest President to shave had been. That it was President Nixon should come as no surprise.

I’d had a shave before Mrs. E. made a honest man of me and it had been a disaster. I looked as if I’d escaped the noose and ruined an evening shirt’s collar. A disposable Mach II had been the culprit that day.

Perhaps, I reasoned, things might turn out differently with a traditional straight-razor and a practiced hand.

We have a new place in town, you see. Even better, they have an on-line registration form. It didn’t actually work for me (or maybe it was me — online things and I don’t always see eye-to-eye), but when I showed up, Meshael, my stylist, was most accommodating and worked me in. To be fair, there was only one other man in the shop having his hair cut. But still, I’d want advance warning if I knew that someone was coming in for a shave.

The shop is located in Shockoe Slip, former warehouse district with cobblestone streets that is now a restaurant row of sorts. Got engaged down there once.

Parking on the street was available! A good sign.

Inside you step through the front door and into a lounge area. Leather club chairs, a flat screen TV, a bar, a rack of ties for sale, magazines scattered about, “product” lined the shelves. Framed photos of the Rat Pack, Sean Connery, the heir and the spare decorate the exposed brick walls. Libations, as I understand it, are on the house when using the salon’s services.

Meshael took my coat and led me to a black leather chair. Collar loosened, I reclined to have the oils rubbed into my day and a half’s growth of beard. There followed a hot towel, some gel of some sort, another towel and a general lathering of the beard. All this lubricating was done with fingers instead of a brush. I was pleasantly relaxed. This portion of things had certainly taken the sting out of errands that would follow.

The music on the stereo was, to me, unidentifiable pop suggesting a younger clientele. I would have preferred some jazz samba or standards, a little crooning from some of the folks framed on the walls, perhaps. But Meshael seemed to enjoy the music and anything that pleases that person holding the straight razor is fine with me.

Speaking of which, out came the straight razor. My skin was gently stretched and with short, precise strokes, I was shorn of bristle. I was nicked only twice (soft skin, not so soft beard.) I took it on the chin both times. The alcohol that was applied (and it must have been alcohol) was a bit of a shock — I’m more of a direct pressure and petroleum jelly on a Q-tip sort — but it must have staunched the flow. A quick once over to make sure that no spots had been missed…. “tighten your lower lip…. upper lip… now open wide like at the dentist…” and the cooling aftershave (gel) was applied. This was followed immediately with a cold towel and a very pleasant sensation of having cheated death once more.

I feel the same way leaving the dentist, come to think of it. Clean and light. But that might be the adrenaline bumping up against the torpor of having been recently reclined. 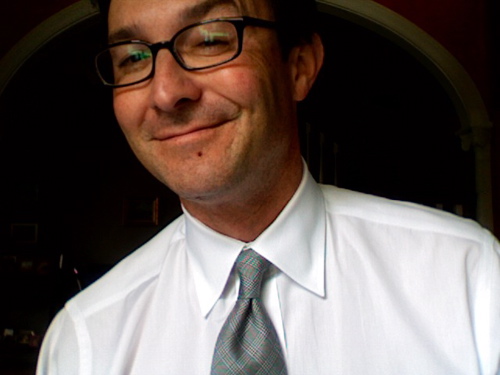 I am not as closely shaved as I am when I do it myself with the Merkur DE, but I’ve been at this face for twenty plus years and know it pretty well. And it’s rare that I escape my own work without a nick or two.

Will I go back? At USD $35 plus tip, it seems a luxury that isn’t necessary. But isn’t that one of the properties of luxury? Next time I might indulge in a shine and a manicure, too. Depends if I can face the music.

That I could walk a block to my next appointment without having to restation the car lent an extra spring to my step.

9 thoughts on “Taking the Sting Out of the Morning, Sort of…”