Some years ago a member of the Editorial staff served as a guest teacher for a class in a suburban middle school. Many of the female employes wore flip-flops and outfits not quite as dressy as casual. He saw only one adult male in a tie. A proposed dress code for Henrico school personnel strikes him as civilized indeed.

It also strikes him as an exercise in futility. A code could prove difficult to implement, in part because defining appropriate apparel could become as complex as the instructions for a “some assembly required” Christmas present. Much would fall to the discretion of principals. Even with a countrywide code, enforcement could vary by school. Ideally, dress codes should not be needed. Vulgarity’s triumph is absolute. (See editorial above.) Satire is the only antidote.
From the Richmond Times-Dispatch Editorial pages, 18 July 2009.

Over the weekend, Mrs. E. and I attended a farewell cocktail party given in honour of our Associate Rector, Dana (who, I am convinced is a rising star in the Episcopal Church) and her husband, the multi-talented Andrew (he plays piano, organ, sings in the choir and writes for GQ.) Having come from Tuxedo Park, they are now embarking for Nob Hill. California will be the richer for their presence.

I bring up the party in light of the quotation from the paper that begins this post. The party was given at the house of my friend The Architect and his partner. It is a very grand affair and a delightful place for a party, especially when the weather is as coöperative as it was Saturday. The silver julip cups sparkled and the crystal glinted at the poolside bar table. Inside, on the polished table an enormous bowl of pears, apples and grapes that served as a centerpiece and was flanked by the pork tenderloins and the cream cheese/onion-pepper compote (at least that’s what I think it was — delicious!) Everywhere, there was the happy buzz of cocktail conversation. The guests were a mixed bunch of parishioners and civilians. The women looked marvelous in cocktail dresses or high summer resort wear. Those men over thirty all wore sport coats; most over forty, ties. Under thirty, they were, to a man, dressed in khakis, jeans or cords with long sleeved shirts rolled up. The J. Crew crew. We eyed one another like the Jets and the Sharks, circling, but rarely interacting.

Andrew bridged the gap, as he always does. An award winning journalist who still works out of New York, he makes his own rules. But his summer sport coat was enviable. A sort of gingham number… or was it checked seersucker? It looked comfortable and packable. (Dana is always stylish and opted for a very swingy linen and cotton, zippered and laced jacket and tiered skirt instead of her vintage togs.) 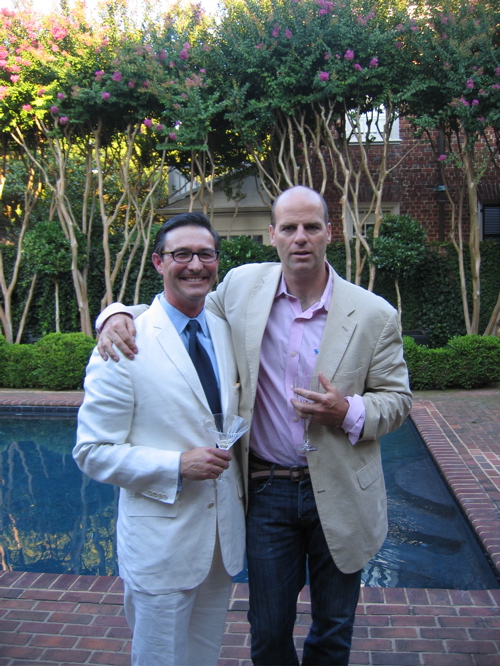 I’ve included this photo, as awful of me as it is, to illustrate a point or two. My joke of the evening was that this was as close to being a real writer as I will ever get — standing next to one and dressing like the other guy from town. (Unseen, black and white spectators by Peal & Co/Brooks Bros.) Wear white linen and you will meet far more people at the party. It’s a conversation piece and universally puts people in a good mood.

It’s a cheap suit (look at the collar and the line of the trouser) that cost, on sale, as much as two pairs of designer jeans. I was cool enough (despite the martinis.) Even Andrew was in a sportcoat. Our hosts expect a certain level of decorum. Would it have killed the under-thirty crowd to rise to the occasion? Or does no one actually own a blue blazer anymore? Do people only dress in the big cities? As a young man, I used to haunt the thrift stores for tweed jackets, blazers, 60’s era suits and overcoats. All affordable enough to have tailored to fit a little better. I wore them to school, clubbing, on dates… they took a lot of abuse and held up, getting more comfortable as they became more mine.

Do the under thirties, as the nascent teachers referred to above, require better role models or actual dress codes? What would you consul them to wear? How do you define cocktail attire? Maybe I am hopelessly outdated and the rules have not been changed so much as completely abandoned.

If I could, I would give one and all a gift subscription to “The Rake” that newly birthed magazine that makes me want to hang up the blogging spurs, because someone’s doing it much better. New issue out now. Subscribe. You’ll love every page. And you, like I, might learn a thing or two.

29 thoughts on “More Than One Man’s Opinion”