A Last Resort for a First Course

Posted on July 28, 2009 by TheElegantologist 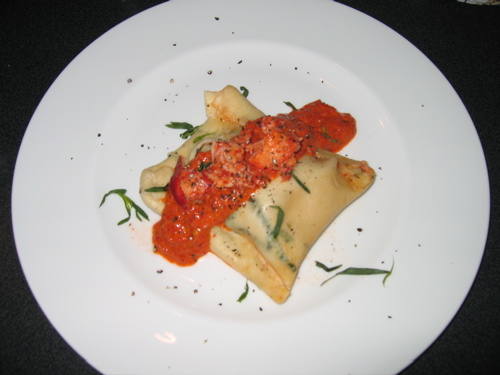 Every so often I get a notion into my head to do something best left to those who do it better. Last week Mrs. E. and I were privileged to attend a birthday dinner that featured an extraordinary dinner menu. Fresh tomato sauce with lobster ravioli, followed by steak over mashed parsnips and a cheese course.

For days I couldn’t get the thought of those perfectly formed, delicious lobster ravioli made with fennel, out of my head. So I decided to make some for a dinner party we had coming up. I did make my own tarragon pasta and the lobster ravioli, but I made a roasted red pepper sauce instead.

The ravioli were large. One per person was plenty. Which was fortunate as I don’t have a ravioli tray and had to hand form each. This is neither easy nor elegant and it takes a bit of effort to pull off, but the result was toothsome nonetheless. I would call it a last resort as a first course. The pasta course was followed by a grilled Teriyaki flank steak, a green salad vinaigrette and a cheese course.

For the pasta combine:

Mix and turn out onto a lightly floured surface. Roll the flour into a smooth ball, cover it with a kitchen towel and let rest for 30 minutes.

After the 30 minutes have elapsed, divide the dough into five pieces. Roll one out with a rolling pin, recover the other pieces. Pass the rolled out piece through your pasta machine on the most open setting. Make four passes, each time folding the dough into thirds before running it back through. Work your way through the settings until you have reached the third from the end. Sprinkle some fresh herbs onto the dough, fold it into thirds and pass through the machine for the last time. This will make about one to two raviolis.

Repeat with the other pieces.

For the filling:
Heat about a tablespoon of olive oil in a medium saucepan

1 large peeled, seeded and chopped tomato
5 medium roasted red peppers, chopped (you amy roast your own in a 350ºF oven until blackened or over flame. Pop them into a plastic ziplock bag and let them sit for 1/2 and hour. Peel) I used tinned ones from Spain, sent by friends just in time!
1 tablespoon of chopped fresh herbs (I used tarragon)
Salt and pepper

Pour in 1/4 cup or so of heavy cream and continue to cook for another 5 minutes.

Chop 3/4 pound of cooked lobster meat. (Mine was mixed claw and tail.)
Add about 2 Tablespoons of freshly grated Parmesan cheese and
1/3 of the purée. Combine.

Lay out a sheet of pasta. Put a dollop of the filling every five inches or so, leaving a border of dough on the sides. Lay another sheet on top and crimp the edges closed with a pasta crimper. I didn’t have one, so I wet the edges and sealed as best I could with the times of a fork and folded over any excess dough. Cut them apart and seal completely. I get about two ravioli out of every two sheets of pasta dough. You won’t use all the filling, reserve some to garnish the dish.

Boil a big pot of salted water. Drop the ravioli into the boiling water. They will sink. When they rise to the surface, they’re cooked. Drain, plate, spoon some of the reserved filling over the top, sprinkle with more fresh herbs and some cracked pepper.

This served four people as a first course with 3 ravioli left over. I will chop and toss the leftovers with a vinaigrette to make a cold lobster and pasta salad for luncheon today.

This entry was posted in Entertaining and tagged Lobster ravioli, recipes. Bookmark the permalink.

7 Responses to A Last Resort for a First Course