Posted on June 22, 2009 by TheElegantologist 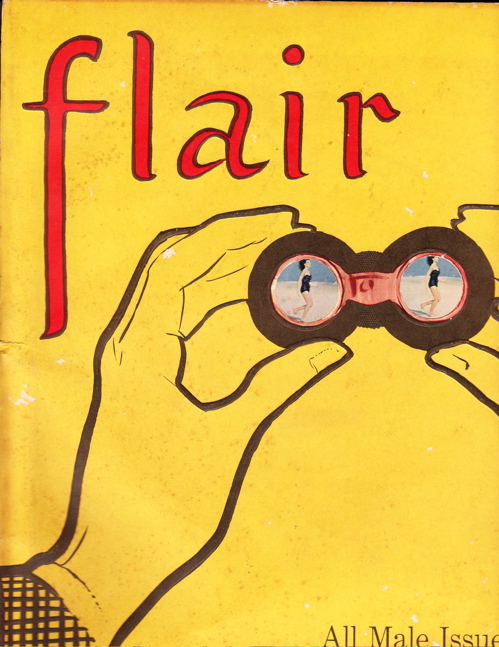 Yesterday was father’s day here in the states. We spent most of it driving back from the beach. Upon our return, and after the drudgery of unpacking, Mrs. E. presented me with a gift… the July 1950 “All Male Issue” (how different that sounds today) of “Flair” magazine. What a gift!

I’m sorry that it was a bit too big for my little desktop scanner. I’ve scanned what I could of an article about one of my sartorial role models, A. J. Biddle. If I weren’t too afraid of cracking the very fragile binding, I would have gotten more of the text (follows.) At any rate, enjoy what you can of these pages and take note of the pinks and greens hanging in the closet. Nice embroidered full birds, eh? (The magazine also included an article on Gary Cooper — what a fellow!) 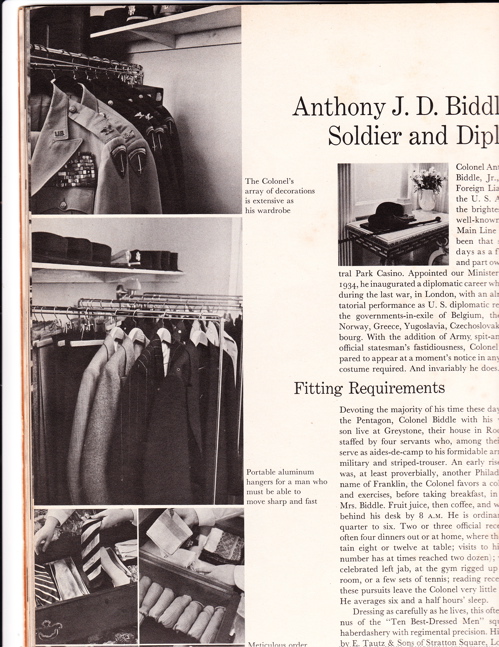 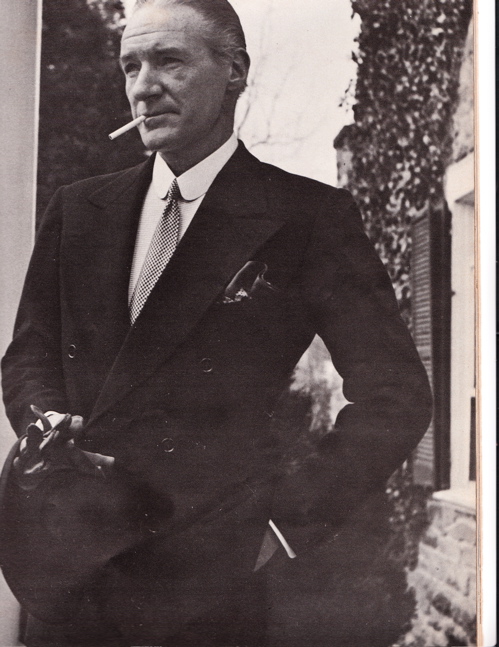 “Anthony J. D. Biddle, Jr., Soldier and Diplomat”
Colonel Anthony J. Drexel Biddle Jr., currently the Foreign Liaison Officer of the U.S. Army, is one of the brightest lights of the well-known Philadelphia Main Line family and hs been that since his ealy days as a fight manager and part owner of the Central Park Casino. Appointed our Minister to Norway in 1934, he inaugurated a diplomatic career which culminated during the last war, in London, with an almost prestidigitatorial performance as U.S. diplomatic representative to the governments-in-exile of Belgium, the Netherlands, Norway, Greece, Yugoslavia, Czechoslovakia and Luxembourg. With the addition of Army spit-and-polish to his official statesman’s fastidiousness, Colonel Biddle is prepared to appear at a moment’s notice in any setting, in any costume required. And invariably he does.

Fitting Requirements
Devoting the majority of his time these days to his desk in the Pentagon, Colonel Biddle with his wife and baby son live at Greystone, their house in Rock Creek Park, staffed by four servants who, among their other duties, serve as aides-de-camp to his formidable army of uniforms, military and striped-trouser. An early riser (by 6:30) as was, at least proverbially, another Philadelphian by the name of Franklin, the Colonel favors a cold morning tub and exercises, before taking breakfast, in his robe, with Mrs. Biddle. Fruit juice, then coffee, and without fail he is behind his desk by 8 A.M. He is ordinarily there until quarter to six. Two or three official receptions weekly; often four dinners out or at home, where the Biddles entertain eight or twelve at table; visits to his clubs (whose number has at times reached two dozen); working out his celebrated left jab, at the gym rigged up in his dressing room, or a few sets of tennis; reading recent nonfiction — these pursuits leave the Colonel very little time for extras. He averages six and a half hours’ sleep.

Dressing as carefully as he lives, this often-chosen alumnus of the “Ten Best-Dressed Men” squares away his haberdashery with regimental precision. His suits are made by E. Tautz & Sons of Stratton Square, London; his sport clothes by H. Harris of New York. Shirts, including the famous ones with horizontally striped, starched bosoms come from Charvet in Paris.

This entry was posted in Elegantology and tagged "Flair" Magazine, A.J. Biddle. Bookmark the permalink.