Posted on June 29, 2009 by TheElegantologist 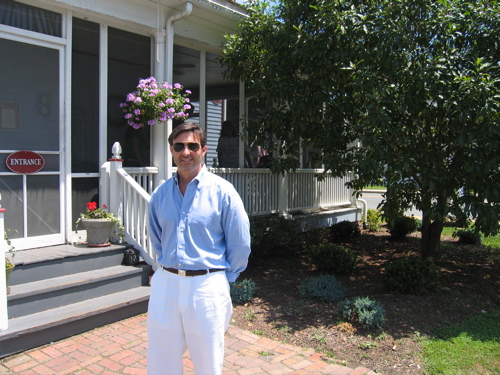 If I remember correctly, that’s how you say “have a nice drive” in French. (Feel free to correct me as I am writing this without benefit of Mrs. E.’s being nearby.)

Getting there used to be half the fun. At least it was for me whenever a plane, train or convertible was involved and the trip wasn’t too long. These days the joys of travel are often muted by the indistinguishable highways, baggage restrictions, security measures and road/air/sidewalk rage.

Mrs. E. and I try to temper the inconveniences as best we can. Like an army, we travel on our stomachs. And this trip, headed for Luray, VA and a wedding as our ultimate destination, was no exception.

Actually, it was an exception. “Exceptional” describes a bed and breakfast experience and “incredible” at least one of our luncheons.

On the way up to the Blue Ridge Mountains, we decided to stop at Toliver House in Gordonsville, VA for lunch. It is roughly two-thirds of the way to Luray from Richmond. We wanted to stop at Barboursville, but there was a special chef’s tasting menu going on and we didn’t have the time or the funds to do the luncheon justice. So Gordonsville won out. And this charming little town completely won us over.

Founded in 1787, Toliver House is old. At least for our young country. As a tavern, it played host to George Washington, Thomas Jefferson, James Madison, James Monroe, the Marquis de Lafayette, Robert E. Lee and pretty much everybody else from the area. The menu is reliable local fare with a couple of surprises thrown in. Mrs. E. had a shrimp quesadilla with a cumin lime sauce. I had the crabcake, which was nicely spiced. 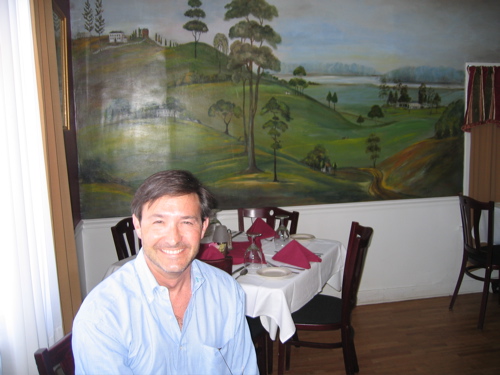 The mural behind me caught our eyes and we enquired about it. It was painted by a friend of the owner’s… a French woman. After three minutes in a nearby garden/antique store (run by a former Richmonder named John who really should visit Greece at least once during his lifetime as he will appreciate it no end) we met Maryvonne, the artist in question. She was to be the first of three French people we met over the two luncheons we spent in Gordonsville.

Off to the wedding.

Thank you to all who piped up with opinions about what I should wear. The final choice was the khaki linen suit, without vest, a white open weave shirt, the tan/pink/white tie and my white bucks. For those of you who have white bucks, I cannot recommend highly enough the Magic Eraser by Mr. Clean. Especially after attending … say… a wedding at a goat farm.

I must also apologize (you knew this was coming) as Mrs. E. forgot about the camera and I have no photos of me at the wedding. Or of Mrs. E. who was stunning in a J. Crew navy silk dress, grey Mallorca pearls and silver sandals. The dress was purchased at Barree Station during our beach trip at roughly 27% of the retail price. 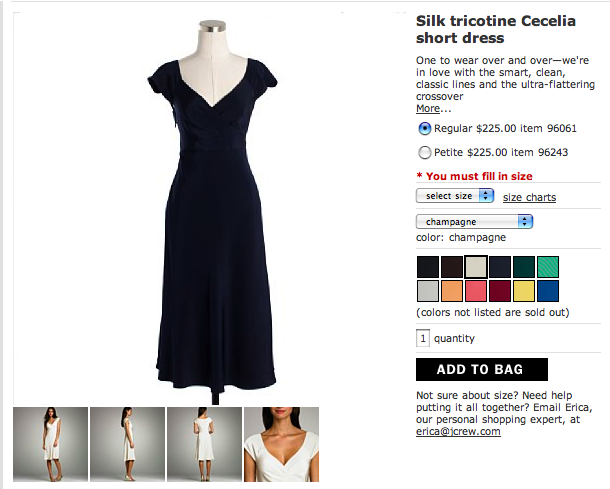 That evening, we stayed at our B&B, the South Court Inn. No, it is not a strict period recreation of a Victorian inn. But it is charming, the breakfast was delicious (I’m going to make lavender honey inspired by Mr. and Mrs. Potts), and the bed very comfortable. The grounds were beautiful, even if past their full Spring bloom. 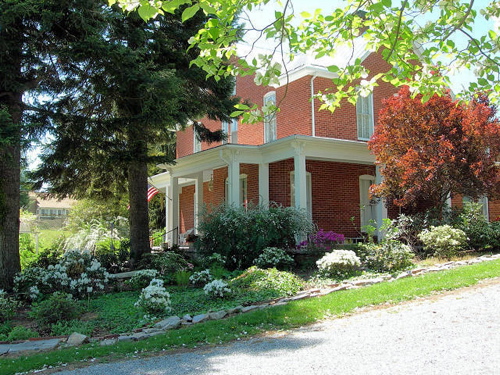 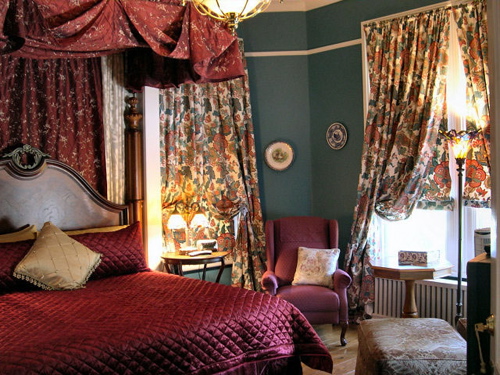 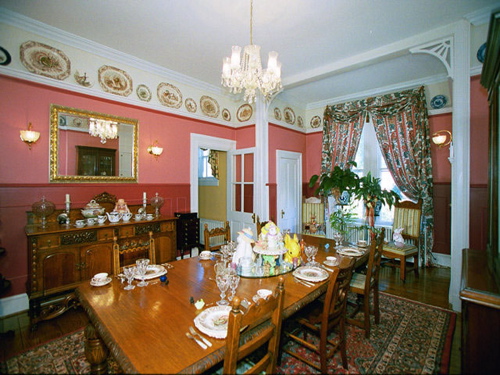 The innkeepers are looking to retire, if you’re interested in taking their place…

After breakfast, we packed up and hit the road for our luncheon in Gordonsville. The trip down the mountains was more enjoyable and it was cool enough to open the sunroof and windows. Mrs. E. did hyperventilate a bit, as is always the case when she ventures into land-locked mountainous regions or the country, but still… .

I wish we had lingered a bit longer in Gordonsville the day before as “S.H. Merrick, Fashion and Interiors” (109 S. Main Street) would have been open… The women’s clothing displayed in the windows stole Mrs. E.’s heart. And she is not a woman who enjoys shopping. I caught a glimpse of a scarf from Drake’s of London, if that is any indication of the quality of the clothing on offer. Instead we browsed through a country furnishings store and bought some old sheet music, a ceramic bunny for our daughter and a carved rooster for our son. At 12:30 we walked into…

Mrs. E. had seared scallops in brown butter and I had a perfect Salade Neptune… lobster, crab, fish terrine, scallops, watercress … really just the thing and a dish of which I haven’t had the like since France. (Why can’t I find cuisine like this?) 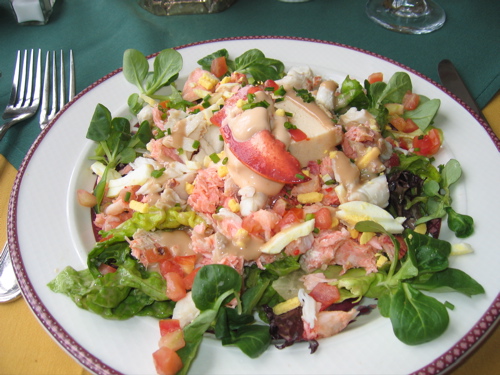 Several glasses of champagne later we left with a doggie bag of homemade foie gras, a promise to return before the end of the summer and the most wonderful feeling of bonhommie. Do you know the ratings system that the Guide Michelin gives to restaurants? Pomme is pushing for the “worth the journey” category. Like MacArthur, we shall return.