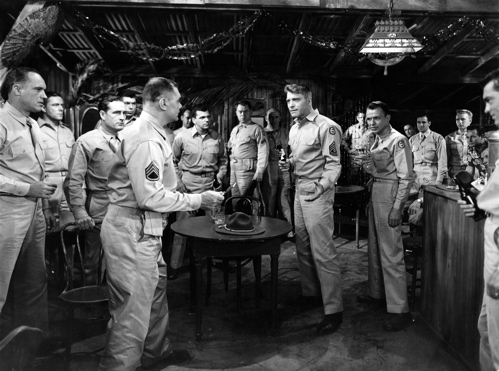 Some thoughts on khakis. Everyone has a pair and quite a few have definite opinions about fit, cut, style, etc. (For a great primer head to The Selvedge Yard.)

I’ve worn khakis for a long time now. Wasn’t born in them like some I know. But they were standard prep school fare and I got to prep school in 1980. For my money there are two kinds of khakis, dress and casual. I know that sounds odd coming from me, but I had a wonderful pair of seriously heavy duty full cut double pleated and cuffed khakis that were my dress khakis. I have to have them starched these days to make them stand as straight.

“Pleated?” you may snort.

Yes, pleated. And when my waist was a cool 29″, it didn’t make a bit of difference. Wish I had a pair just like them now (at a more appropriate waist size.)

And that brings me to my point. I hear a lot about flat front khakis. Mostly that they are more flattering. OK, I’m game. But there is more to it than removing pleats. Fit, as we know, is everything. But let’s also take a moment to think about cut. And a little history.

Pleats were pretty standard fare on men’s dress trousers up until cloth rationing made them, and cuffs (turn-ups), undesirable for clothing manufacturers. Pleats are more comfortable to wear, especially when seated. They also disguise imperfections nicely — when worn correctly at the natural waist and are suspended from the shoulders with a pair of suspenders (braces.) Belts and pleats, that’s where you can run into trouble if the trouser slips beneath your waist to rest on your hips, the pleats pop open. Avoid that and you’re doing all right.

Can khakis be elegant? The former military trouser constructed of heavy twill, with the high rise waist and full cut leg is tough to pull off. There is plenty of room in the seat, plenty of room at the knee and a universal length of 36″. Provided that you are trim enough, they flatter. The advantage to the higher waist is that it sits nicely under your blue blazer without letting acres of billowing shirt and belt show. 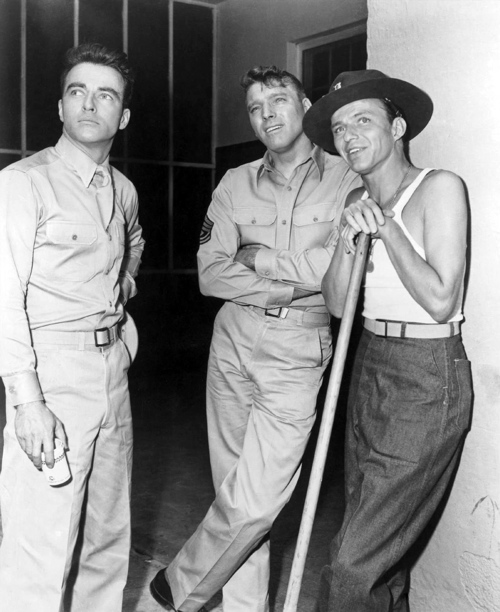 Now those are three fine examples of the male of the species. I’m willing to bet that there was a tailor involved in the filming of “From Here to Eternity.” Here’s what happens when the Trousers, Cotton, U.T. are simply hemmed and heavily starched. 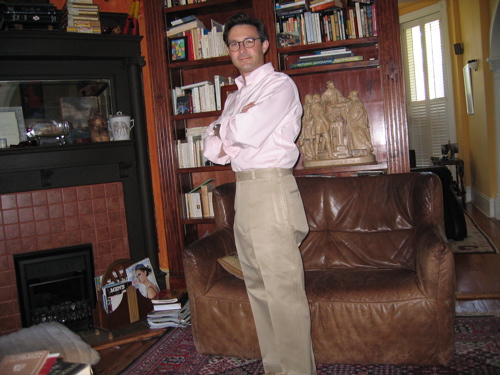 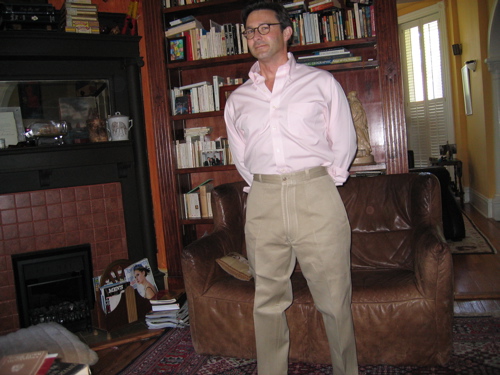 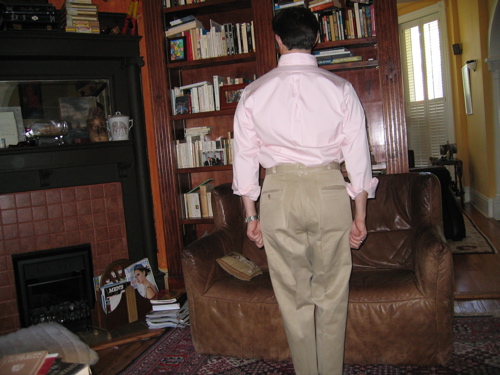 (What a Sad Sack. I opened a foot locker and discovered a few pairs of government issue khakis that were my father’s. These date from 1967. I’m working on breaking the starch on the earlier, button fly models.)

Cotton (and linen) “show work.” That is they do not allow for re-alteration (specifically letting out or easing seams.) Which means you have one chance at getting it right at the tailors. Too tight and it’s back to boot camp to work off a few pounds. The men who wore those khakis were in pretty good shape for the most part. Even the officers. 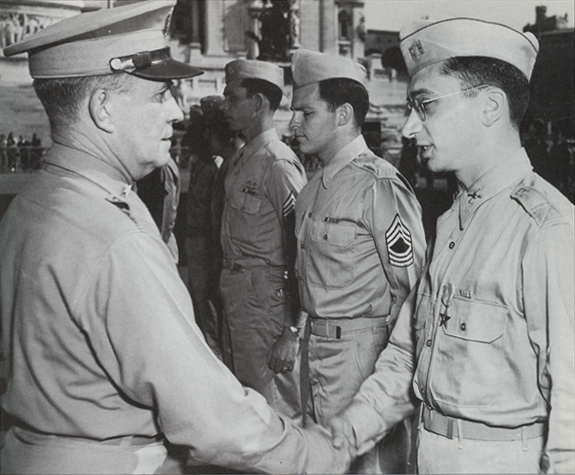 .
That’s Cap. Philip J. Corso being given a commendation in Rome in 1945. This is years before he helps hide alien technology at Roswell.

So, you see, fit plays into this again. There are models that replicate the military specifications for khakis, most notably Bill’s Khakis, but I’m found the rise to be a bit shorter. The best were the no-longer-produced-ahead-of-their-time Dockers (Yes Dockers!) K-1 Cramerton cloth version. 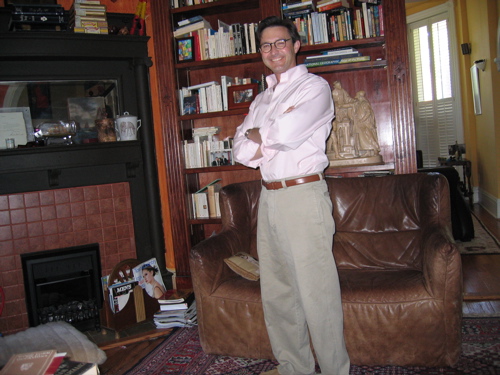 But khakis were also worn pleated. 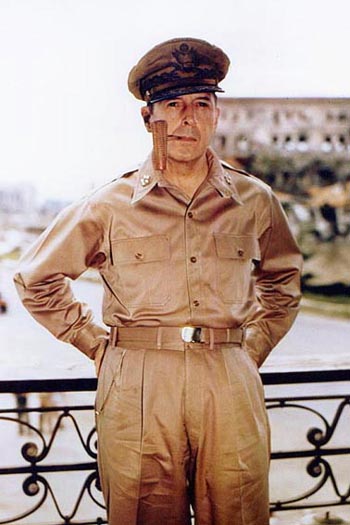 The Bill’s Khaki’s version. I believe are based on British Officer’s khaki trousers. They feature double forward pleats. 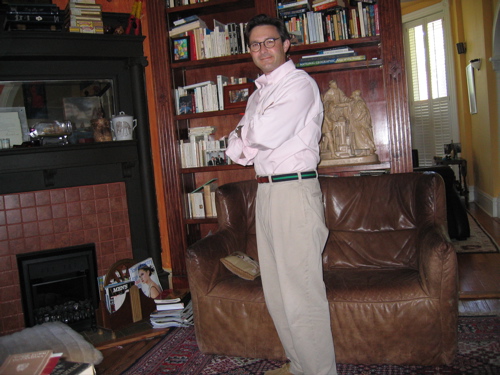 The trick to wearing pleats and a belt is to buy khakis in heavier weights. (Starch helps, too. You’ll notice that these are a mess. I rarely wear khakis out of the house.)

But what I suspect is the flattering cut to which most refer, is the “new” low rise, slim cut flat front. They have the advantage of resting on the hips (thanks to the low rise) and, so, will remind you of blue jeans. The narrower knee and leg opening require a trimmer physique though. Be sure to have them hemmed at the right length — very little to no break looks right. Buy these in poplin — a very light fabric that I think of when I think of “chinos” — and you may tolerate the heat of summer better in the trimmer cut. 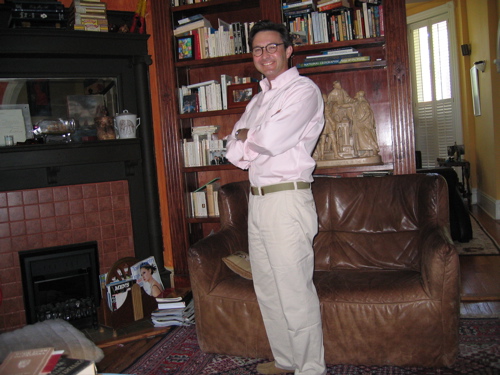 (Polo Ralph Lauren. I like them, aside from the embroidered polo pony logo at the right hip.)

If you are lucky enough to find vintage khakis, you can always have them pegged. Start at the waistband. It’s a matter of taste. And of your physique. Wear what looks good on you.

Now, about shorts and desert boots…

7 thoughts on “Dusting Off the Khakis”