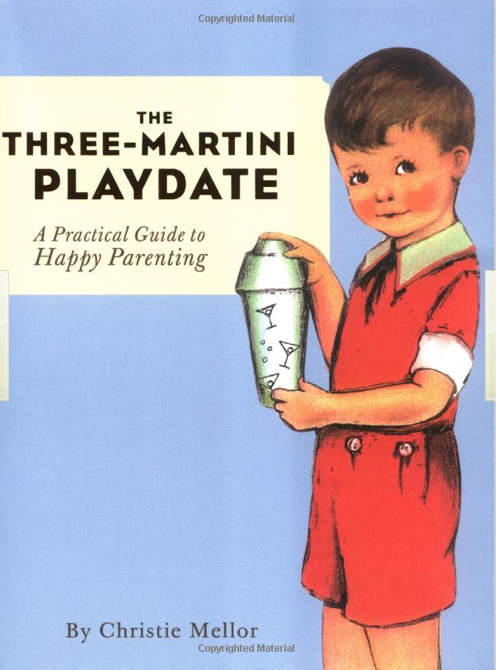 (The Three-Martini Playdate: A Practical Guide to Happy Parenting

As the father of two toddlers, one of whom has been convalescing after a bout with pneumonia, I am beginning to wonder:

Is it possible to lead a very elegant life if you have young children? Without employing a nanny, I mean.

But it certainly depends on how you view your relationship with your children, your spouse and your environment.

Let me explain. I recently left a comment on a nice little blog suggesting that the new owner of a vintage tartan sportcoat have some grosgrain lapels run up to convert it to a dinner jacket as needed. While he appreciated the idea, he replied that as the father of two small children he didn’t foresee the likelihood of attending a formal event, even at home.

I hope that his situation doesn’t disappoint him. It would me. Taking the kids to something and letting them run around and play, tossing a ball, blowing bubbles, riding the tricycles are all lots of fun, but Mrs. E. and I need our time — and I like to dress.

As I’ve no doubt mentioned before, I grew up amidst a cocktail party. Perhaps the reason that the opening scenes of Rosalind Russell’s cocktail party in “Auntie Mame” resonate so well with me is that it seems a bit like what I remember from childhood. Oh, we didn’t inhabit 1 Beekman Place, or its close equivalent. The earliest of these memories of my parents must have its roots in about 1971 or ’72. Ours was a three floor townhouse in a small town in the south of Holland. My father was attached to NATO at the time, working at an Army post and making trips to SHAPE when called upon. My father was the only American officer in an office of Belgians, Brits, Dutch, I’m not sure who all… . It goes without saying that my parents’ parties were not filled with Bohemian artists, tycoons, philosophers, and actors. But they did have their fair share of foreign military personnel and ex-pats. Somewhere there is a picture of my five year old self making the rounds with a bar towel draped over an arm and a martini laden tray in hand. In fact, I looked a lot like that kid on the dust jacket above; only my suit was black velvet (it was usually after six…) Sometimes I would help empty those silver rimmed crystal ashtrays (remember those?) of the Dunhills, Player’s and lipstick-smudged Sobranies.

You know those jazz recordings where you hear the audience dining in the background? That low mummur under the music, the ice clinking in the glasses, the occasional peel of laughter? I’m right back there, five years old. I longed to be a grown-up. They were having some kind of a good time!

I guess my point is that I fit into my parents’ life, they didn’t fit into mine. When I stepped out of the house, I was reminded that I was representing my County and my parents, in that order. By all accounts, I was well-behaved. I’m an only and I’m sure that this is much easier a) on foreign soil and b) with a somewhat sickly little kid who didn’t always have a lot of wind, but was pretty well medicated and c) if you outnumber your charges.

Now that I have two children under the age of five (and as an older parent of almost 43), I marvel at how well my parents’ generation maintained control. I don’t remember feeling particularly put upon, or stifled. There was a pecking order and I was at the bottom of it. Acknowledged, listened to, encouraged and accommodated — to a point.

What’s the point? you’re asking. Just this. Give your kids some great memories of adults in action. Throw a cocktail party and make it as formal as you’d like. With our weather lately, chances are the ballgame’s going to be rained out anyway. Have the gang over. The bonus? You don’t have to pay a sitter, you’re at home.

But make it a cocktail party. What the French do when they invite you for an aperitif. Set it for 7:30 – 9 PM or 5 – 7 PM, depending on how involved you want the children to be. But set the time for the party to end.

That means a limited number of finger foods/snacks/hors d’œuvres, and drinks. Nothing too fancy and certainly nothing like a Blue Blazer that requires open flame.

Make and pass: Broiled rounds of French bread covered with swiss cheese and sprinkled with bits of ham and a dab of mustard and Triscuts with cream cheese and pepper jelly. Scatter about salted mixed nuts and potato chips.

As for the bar, have on hand lots of good ice, several bottles of sparkling wine/Champagne/Cava, a bottle or two of red, a bottle of Scotch whisky, a bottle of Bourbon (especially if you’re here in the South!), a bottle of gin (and a small bottle of chilled Vermouth), a bottle of Vodka and a bottle of Rum. Mixers should include Coca Cola (I like to serve Coke Zero, diet but tastes like the real thing), Ginger Ale, Tonic, Soda and a fruit juice if you’re feeling up to it. Slice up some citrus fruits for the bar and lay out a bowl of olives and a shot glass of cocktail picks. One pitcher (or Boston Shaker and strainer) and stirrer and one cocktail shaker should serve you well. Stemmed glasses for the wines, double-old-fashioneds for the mixed drinks and a couple of martini glasses are usually all the glasses you need.

There are a few of good books that I recommend for new parents.

(written by a sleep Doctor)

The Three-Martini Playdate: A Practical Guide to Happy Parenting

(My daughter is much easier about this stuff. But she’s older. And a flirt…)

If you’re still hankering for an outdoor adventure, have everyone bring the kids and set up the lawn games (croquet, bocce/pétanque, bicycle polo, badminton.) I usually wait until after Memorial Day to do this as I can wear a white dinner jacket in the evening or white linen trousers during the day. The dry cleaning bills are worth it, and you’re teaching the children that you can be well-dressed and still have fun.

19 thoughts on “Children and the Elegant Life”