Posted on March 14, 2009 by TheElegantologist 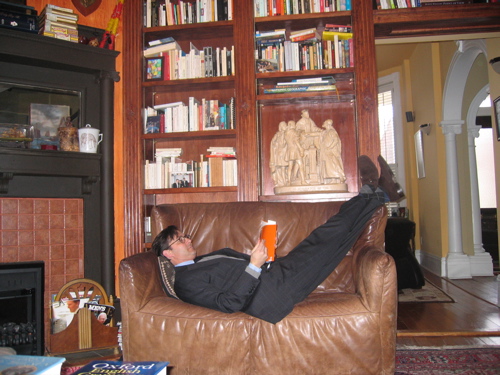 (Well Doc, ever since I was a puppy…)

When tartanscot tagged me and asked that I provide six interesting things about myself, I said “sure.”

It’s harder than I expected. I can think of six quirky things right off the bat, but interesting…. I’m pretty normal, average, even.

By the time I was nine years old, I had lived in three countries and spoke three languages other than my own. I only have English and some French now.

I own four tuxedos, three dinner jackets (two white, one plaid), a bottle green velvet smoking jacket and a set of tails.

I’ve worked for a (then) secret government agency, two clothing companies, a internationally famous ad agency, as a direct mail fundraiser, started an advertising/marketing company and was once a ballroom dance instructor.

As an 11 year old, I once brought down two ducks with one shot.

I took second place in sabre in the Junior Olympics in Virginia.

I’ve been to Africa, but have never seen California.

See what I mean?

This entry was posted in Uncategorized and tagged tagged, Tartanscot. Bookmark the permalink.