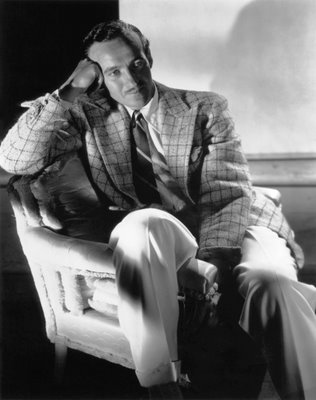 Ever since reading HOBAC’s post on Capucine, I’ve had David Niven on the brain. I thought about him this morning, as I was locked out of the house and forced to extend my run to kill time. I certainly wasn’t going to step foot into so much as a Starbuck’s looking as I did.

Mr. Niven took regular exercise, too, you see: skiing and swimming; depending on which of his two houses he was inhabiting — the one in the South of France or the one in Switzerland — he skied or swam. And that jives with the image of him that I have in my head. Skiing and swimming, unless competitive, aren’t generally sweaty pursuits.

Would you call him a dandy? The photo at the top of this post shows that he wore his clothes well — that is, he wore them easily– as he would have pyjamas. He also carried himself well. But that is probably a byproduct of his schooling at Stowe and Sandhurst. Well, that and the skiing and swimming.

And he certainly spoke well and often with a certain self-deprecating humour.

Can you imagine a better tribute than that given by Sir John Moritmer (Of Rumpole fame) who said of his friend: “I don’t think his acting ever quite achieved the brilliance or the polish of his dinner-party conversations.”?

There is much here to emulate and even more to like. For a mid-winter treat, pop “The Pink Panther

” into the DvD player. For more about Sir David’s many escapades, go right to the source. “The Moon’s a Balloon

6 thoughts on “The Moon Was His Balloon. Style Icon: David Niven”