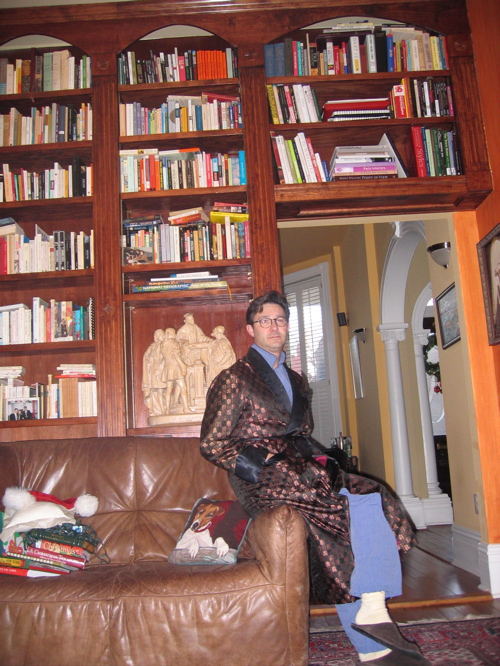 Even the dog is sneezing today.

I had an interesting conversation over the weekend with a very well-tailored (trad) man who made my mumblings about things elegant sound incoherent.

He posed the question, why and when did it become fashionable to be anti-intellectual? To be ashamed of being from a certain North-Eastern tradition of (liberal?) thought? When did some of us become “traitors to their class?”

I felt as if I were living a Whit Stillman movie. This fellow was definitely of the UHB variety. The sort who gets paid to think about things and then turn those thoughts into money.

My argument, if it could be called that, was far from coherent as my thoughts are, more often than not, highly disordered.

Well that and I was severely distracted but the cut and cloth of his suit. Exact in cut. Luxurious in chalk striped grey flannel. Just the slightest break over the highly polished oxblood brogues.

I’ve since figured out what I wanted to say. (The French call this l’esprit d’escalier**… the thoughts you have on the way down the staircase well after the fact.) I think it’s sort of a reverse snobbery. We all want to be one of the cool kids at school. No one wants to be the egghead. Funny thing is, the older one gets the more one appreciates intelligence. Intelligence is the bedrock upon which is built wit, for example.

Now, I make it a business to take lightly those things that most take very seriously and seriously the lightest of subjects. But put me in a room with the very educated and I will happily mix the drinks and steep in the heady conversation washing over me, like art.

But the thing that really stuck with me after all the champagne was his statement about settling. “Who wants just O.K.?” he asked. “Have either the best or the worst. Keep the best and walk away from the worst.” Or words to that effect. He then espoused the opinion that building a rich fantasy of one’s life is the best hedge against the mediocre.

And that statement put me in mind of something Gerald Murphy once told Fitzgerald: “…for me only the invented part of life is satisfying, the unrealistic part. …The invented part, for me, is what has meaning.” *

Just a few thoughts from Petrie House (Slogan: Breeding the Very Nastiest Winter Viruses for You and Your Family.) Be sure to cultivate your legend this Christmas. It is a season for believing, after all.

** thanks Aesthete, for the correction.