Posted on September 16, 2008 by TheElegantologist 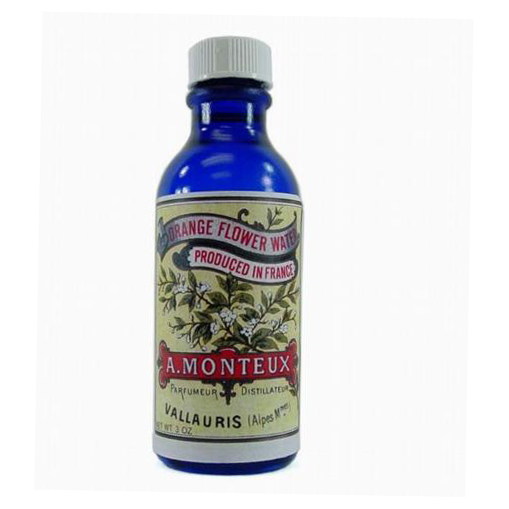 As I listened to the wonderful podcast of The Splendid Table (free from iTunes!) I was by turns grateful (that I hadn’t been swindled out of USD$156,000 for a bottle of “Thomas Jefferson’s wine”), intrigued (to try a new gazpacho recipe and new blender: the Vitamix) and surprised.

It was during a segment on baking desserts, a segment to which I was only half-listening as I don’t bake very well. The woman was going on about her Greek grandmother (ah! My ears perked up a bit) and how she smelled of Orange Flower Water. She used it in her desserts and daubed a bit behind the ears.

“Hey! I’ve got a bottle of that stuff lying around,” I thought.

My friend, CallMeAl, had run it to ground years ago and presented me with the gift of the perfectly hard-to-find last ingredient for a Ramos Gin Fizz. Or was it the New Orleans Sazerac? I can never remember until I see the recipe. At any rate, I had never thought of the distillation as anything other than a cocktail ingredient (it can be argued that I view all things as potential cocktail ingredients and have also been known to daub a little martini behind the ear whilst mixing. I mean, it can’t be that far removed from Bay Rhum, can it?)

Orange flower water is the left over liquid from the distillation of bitter orange blossoms. (The distillate, an essential oil, is called neroli and is used in perfumes.) Orange flower water is sometimes referred to as an “essential water” and is frequently used in Middle Eastern cooking. It also holds up well. My bottle is from Crabtree & Evelyn, which doesn’t seem to carry it anymore. It must be at least ten years old.

It also turns out that it makes a delicious glass of sweetened mint tea that much better! Thanks Splendid Table! Give it a try. Highly recommended.