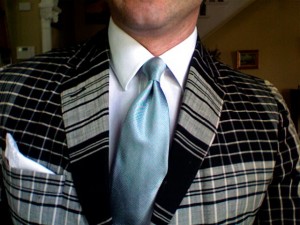 I know it’s still spring. But temperatures fluctuate here in the Old Dominion and today they will soar to 80ºF. Which has me wishing for a pair of “go-to-hell” patchwork Madras plaid pants.

Madras is an Indian fabric, and like that other Indian invention seersucker, it is made to make the most of a hot climate. We also have the English to thank for introducing the material woven in the capital of Madraspatnam to the West. The East India Company set up a fort in the 1600’s and invited the locals to set up shop outside the gates. The cotton was unusually light and often brightly coloured (or in white) and used for turbans. The English had it made up into shirts. Preps, a few centuries later, had it made into just about everything. (The coat above was my father’s, made in N. Ireland and purchased in the B.V.I.’s while he and my mother were honeymooning. It is very Thom Browne on me, but my son will make great use of it at school.)

But back to the pants…. one of the great benefits of blogging is that PR people seek you out to show you things which exactly match your interests. Which is exactly what happened when Emily pointed me to a client: Cape Madras, of Cape Elizabeth, ME. 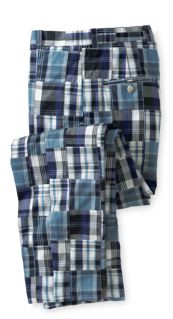 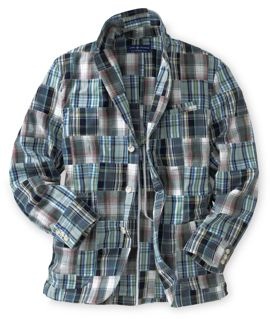 And yes, they do shirts and dresses and shorts, too.

From the press release:
Cape Madras is a fabric driven Apparel Company that continues to expand its fabric line with new and fresh colors. The patch patterns are made up in a diagonal pattern of three madras fabrics to make the patchwork. Jenna continues: “We weave all our own fabric in India, only after producing hundreds of sample swatches on hand looms and then laying them out to experiment with colors and combinations. We’re taking madras to a new level by updating colors not usually seen in traditional madras. Our patterns are all new colors in bright pinks and greens and oranges and will change what people usually associate with madras colors.”

Jenna Sisselman founded the company in 2004 after leafing through her husband’s high school yearbook. The image that comes to mind does conjure up carefree summer days and waiting for graduation. Which may be why, with my art history class winding down, I feel like throwing caution to the wind and snapping up a pair of patchwork, environmentally sustainable, feel-good, “go-to-hell” madras trousers. I will not, however, be wearing them with my father’s sportcoat.

Get ’em while you can. And a word of warning, I’m partial to the Riviera and Stockbridge patterns…

This entry was posted in Elegantology and tagged cloth, clothing, Elegantology, summer. Bookmark the permalink.