Posted on March 26, 2008 by TheElegantologist 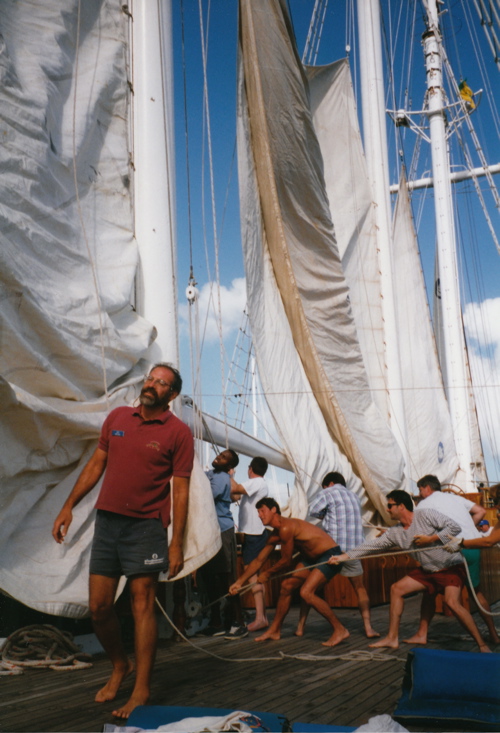 Inspired by {this is glamorous},I thought I’d post on one of my favourite items of summer apparel: the Breton Sailor’s Shirt. (That’s one I’m wearing in the photo aboard The Fantome.)

The French sailor’s shirt has been a staple on beaches from France to well, France. And sometimes you see them in ads (Jean-Paul Gaultier is a fan), or on famous artist’s backs (M. Picasso’s, most famously and perhaps alone.) Gerald Murphy outfitted himself and the crew of The Weatherbird in them.

Weirdly enough, my shirts are by an English-sounding company: St. James and were purchased in Nice, close to the port, across the street from that English-language bookstore which yielded a roughed-up paperback copy of “Casino Royale” and a Penguin edition of “My Man Jeeves.” A banner shopping day.

The shirts are French, though, originally the wool was produced in Normandy, not far from Mont Saint-Michel, in the fortified city of Saint James. Yes fortified, it’s that old. Having been founded by William the Conquerer, Saint James was also one of the stops on the traditional Christian pilgrims’ route to Santiago de Campostela. The company that produced and sold the wool went public in 1929 and by 1950, it was outfitting lifeguards in France. Today, there are a number of designs, colours and even articles of clothing produced by Saint James, but it’s still the striped fisherman’s shirts and button-shoulder pull-overs to which I gravitate.

I’m not sure that this is a look that everyone can pull off. You will be noticed — boat necked, long sleeved, striped, heavyweight cotton shirts tend to get noticed, especially in a sea of Tommy Bahama t’s and the odd Aloha shirt. To say nothing of the sweaters that button at the left shoulder. They also look phenomenal on women, where the boxy cut accentuates without clinging. The cut is boxy, at best, and the shirts are much better with some age on them.

But with a good tan, a pair of blue linen drawstring pants, white shorts, or jeans they are hard to beat and will never go truly out of style. And don’t forget your espadrilles. They’re already staring anyway.

This entry was posted in Elegantology and tagged casual clothing, Elegantology, traveling. Bookmark the permalink.