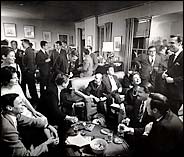 (image: the New York Times)
Sometimes, the simplest affairs are the best. That’s certainly true of the cocktail party.

“You know,” said the architect at a recent club meeting as he passed around a silver platter of homemade croutons, “I always had the best appetizers when I was poorer. Day old bread, salt, sesame oil, oregano, olive oil, garlic….”

They were delicious. And easy. And they make me wonder what all the fuss is about whenever I have to serve up an amuse-gueule.

Look at Mr. Plimpton’s party, above. He was notorious for serving up two big bottles of scotch and one of vodka. Hors d’oeuvres were undertaken with reluctance and necessitated the covering of the billiards table in the office of The Paris review (headquartered in his house.) That’s not a lot of anything for a crowd. Except for the booze, of course. Outnumbered, again.

The architect makes toast rounds by leaving them in a gas oven overnight. The pilot light “toasts” the bread nicely by the time drinks are served.

For those of you keeping score and in need of a fast nibble to serve with the drinks:

1) Wipe with a broken clove of garlic, paint with olive oil and add a sprinkle of oregano, sea salt and toast.

3) Paint with almond oil, sprinkle with salt (add optional grating of gruyere cheese and broil for a moment to melt.)

Serve on a polished silver platter set out next to the drinks.