Suits of Our Fathers

Posted on November 19, 2007 by TheElegantologist 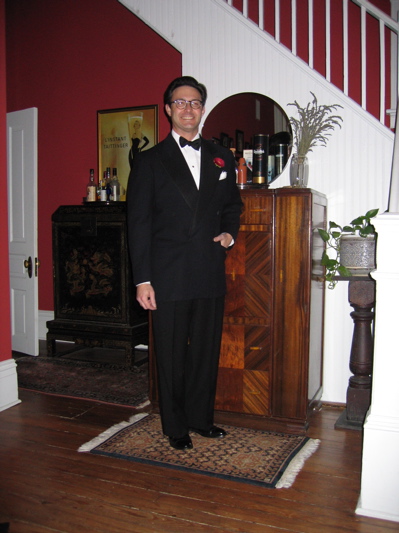 They looked good didn’t they? All those movie stars in the 30’s, 40’s and 50’s. Immaculate. And there’s a good reason for it. Thirteen ounce fabric is heavy, really heavy. So it drapes beautifully and resists wrinkling.

“Man, that’s beautiful work,” said Paul and Kevin at Franco’s as they marked me for some minor alterations so that I could wear my father’s 1948, double-breasted, midnight blue dinner suit with the heavy grosgrain peaked lapels to a wedding reception.

The suit was probably bought for him to wear to a high school prom — in Baton Rouge, LA.

“The fabric is the reason it’s in such great shape” said Kevin.

“Couldn’t sell it today,” said Paul, who also hails from Baton Rouge. “And I’m glad that I don’t have to wear it. I couldn’t do it.”

I also had the elegant Mrs. E’s grandfather’s tuxedo fitted and repaired at the same time. It, too, is very heavy. It was made for him in San Diego, CA.

Neither Baton Rouge nor San Diego is known for being particularly cold, yet suits of this weight were once the rule almost everywhere. In fact, they were preferred. Cary Grant’s famous grey-blue glen check from “North By Northwest” was a 13 ouncer made up by Kilgour. When asked how he stayed so immaculate while being chased through open fields by a cropduster, he answered: “Six suits and dozens of ties.” † If the suits had been made with today’s substantially lighter fabrics, I think the answer would have been “Six ties and dozens of suits.”

“They don’t make them like that anymore, do they?” Kevin emailed in response to my note of thanks.

So was it worth it sacrificing “comfort” for style?

Well, I was in great shape that 38ºF evening, even indoors at “The Club.” In great shape all the way up until the “dancing” started. Not much in the way of a stately Foxtrot or Waltz. By the end of the evening I was recalling my college days leaping about to “Shout” and “That’s What I Like About You.” After which it was determined that I lost five pounds of water weight.

Fred Astaire used to wear longjohns under his tails. I can only imagine that it was to soak up the sweat. Despite the marcella shirt with the transparent sleeves from Budd, I was dripping — visibly from the neck up, anyway.

But I was stopped by numerous people who told me that I looked great. And did I mention that I lost five pounds?

I guess my point is: if you don’t have a tuxedo, stop renting. Find a vintage dinner jacket and a good alterations tailor and you, too, can have that Old Hollywood glamour.

This entry was posted in Elegantology. Bookmark the permalink.

4 Responses to Suits of Our Fathers