Posted on November 13, 2007 by TheElegantologist 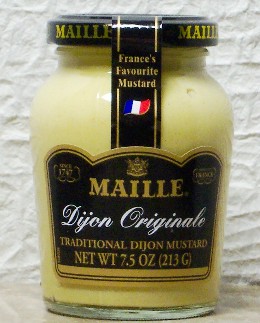 We were fortunate to have delightful guests for dinner last weekend. Unfortunately it was after a day of birthday party frivolity for my father-in-law. The usually effervescent Mrs. E and I were worn thin. Dinner was the last thing that we wanted to throw together, espcially in the two hours that we had before the doorbell was to ring.

Necessity is the mother of invention. Two recipes were invented that promise to assume regular rotation in the easy and elegant entertaining tradition.

We had come home from the party with a fully cooked pork loin. A quick survey of the pantry yielded a bag of fingerling potatoes and a pound of asparagus. So far, so good. But how was I to dress up the meat to make it look less leftover after reheating?

The answer lay in a simple pan sauce. The problem, of course, is that I didn’t cook the pork loin in a pan — or at all. I reheated it in tinfoil in the oven. Which meant no fond — no drippings, no browned bits to scrap up… no sauce makings.

I needed a base — chicken stock would have to do. So, I sauteéd half an onion, a clove of garlic in some olive oil, waiting until the onions began to carmelize. Then I added salt and pepper, and a pinch of fine herbes and a spoonful of dijon mustard. Next up was the chicken stock — about 6 ounces worth. After the whole thing had boiled down some on a low simmer, I swirled in a little knob of butter and called it sauce. It made just enough to drizzle generously over three slices of pork loin.

Steam the asparagus, drizzle with Basalmic vinegar, sprinke with salt and pepper. Roast the fingerlings in olive oil, salt and pepper and serve it all with a little crusty bread and lots of wine. We had a Picpoul white on hand.

This entry was posted in Entertaining. Bookmark the permalink.