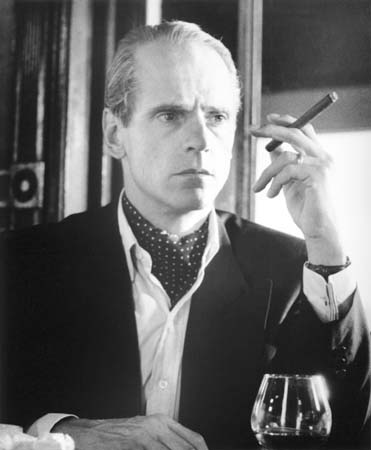 “You may not like Claus von Bülow…” says Ron Silver as Alan Dershowitz in “Reversal of Fortune.” But we can admire the man’s (as played by Jeremy Irons and dressed by Judianna Makovsky) timeless style. Especially since this movie was made in 1990. Pictures of me during those days would not reveal the same restraint and good taste displayed across the board. Aside from an unfortunate choice of neckwear with a white dinner jacket for an afternoon garden party, the choices of clothing throughout the movie are exemplary.

This is a lesson in very elegant dressing that is often overlooked when we consider the canon of movies featuring the well-dressed. Perhaps because Mr. Irons doesn’t carry the look over into his real life the way that Astaire, Grant, Cooper, et al. did.

In the movie you will see Mr. Irons wearing: an ascot; superbly cut single and double-breasted dark suits; conservative Macclesfield, Spitalfield and maybe Ancient Madder) ties; blue striped shirts with cut-away collars; cardigans; sweater vests; cashmere turtlenecks; grey flannel trousers; a plaid sports coat; carpet slippers; a dressing gown, a dinner suit; and, pocket squares. Taken as a whole, the wardrobe is very sharp. However, Mr. Irons’ von Bülow doesn’t stray from his polished, black captoes; which is in keeping with his having worked in London.

Rent the movie and take it as an object lesson. Then mix in some dark brown lace-ups or a suede monkstrap. Just ignore the garden party scene.

One thought on “A Fortunate Role Model”